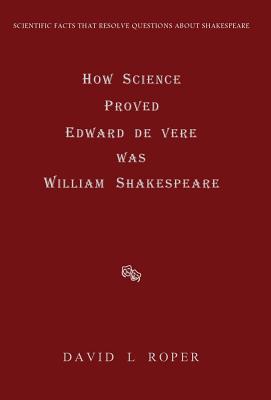 By David L. Roper
$28.50
UNAVAILABLE-Possible Reasons: Backordered, Out-of-Stock, or Out-of-Print (But email us to search for a copy.)

This book began as an article first published in the Journal of Scientific Exploration - Vol. 31, No. 4, pp. 643-694, 2017; and it follows the content by expanding and adding to it. The original article is also the first publication to provide scientific evidence, amounting to proof, that Edward de Vere, 17th Earl of Oxford, was the true author of the plays and poetry popularly ascribed to William Shakespeare.

The subject of Shakespeare's authorship has a long history of doubt accompanying it, but until now there has been no convincing evidence to overcome the uncertainties. Eleven 'rune' ciphers, authenticated by poets: Edward de Vere, Ben Jonson, Edmund Spenser, Thomas Nashe, Leonard Digges, together with those published by Thomas Thorpe and John Benson, have recently been discovered. Each one of these is united by the single code word 'rune', with its archaic meaning of "whisper, talk in secret", and by the repeated key to each cipher having employed the number 17, to coincide with the 17th Earl of Oxford.

The employment of such ciphers is a recognized part of the science of cryptology. The book therefore commences with a brief overview of how cryptography became a science in Europe during the Renaissance, together with its arrival in Elizabethan England, where it was used by both pro and anti-government interests, as well as by men of letters to combat the heavy censorship imposed upon the written word by Lord Burghley.

The transfer of authorial identity between Lord Oxford and William Shakespeare can be fully explained as a consequence, orchestrated by Burghley (father-in-law and former guardian of Lord Oxford) to shield three noble families from public scandal, if his son-in-law's sonnets of endearment to the teenage 3rd Earl of Southampton were published; especially since, the boy was a ward of the Queen, placed under his guardianship. And so, by first censoring the Sonnets and then transferring their authorship to a man from the lower classes, resident in the midlands, any connexion between the earls of Oxford and Southampton became extinguished.

The book also apprises the reader that because the first half of Shakespeare's life is void of any facts concerning literature or penmanship, it has become a depository for biographers to graph their own conjectures into this empty space; without which, there would be no biographies of Stratford's William Shakespeare.