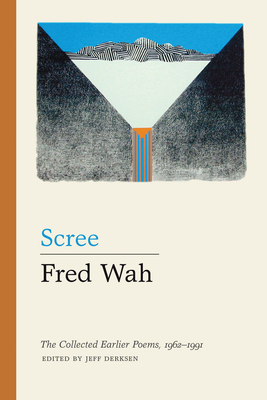 Fred Wah's career has spanned six decades and a range of formal styles and preoccupations. Scree collects Wah's concrete and sound poetry of the 1960s, his landscape-centric work of the 1970s, and his ethnicity-oriented poems of the 1980s. Fred was a founding member of the avant-garde TISH group, which helped turn Canadian poetry, in the West in particular, to a focus on language. He has said that his "writing has been sustained, primarily, by two interests: racial hybridity and the local." Most of Wah's early work is out of print. This collection allows readers to (re)discover this groundbreaking work. The volume contains: Lardeau (1965)
Mountain (1967)
Among (1972)
Tree (1972)
Earth (1974)
Pictograms from the Interior of B.C. (1975)
Loki Is Buried at Smoky Creek (1980)
Owner's Manual (1981)
Breathin' My Name with a Sigh (1981)
Grasp the Sparrow's Tail (1982)
Waiting for Saskatchewan (1985)
Rooftops (1988)
So Far (1991) The collection has been organized according to a chronology of composition (rather than a chronology of original publication): this reveals new connections and thematic trajectories in the body of work as a whole, and makes the book an eminently "teachable" volume. The book includes full-colour facsimiles of two early books, Earth and Tree, reproduced to show the "hands-on" object-based aspect of chapbook publishing.