Tracing the Lines: Reflections on Contemporary Poetics and Cultural Politics in Honour of Roy Miki (Paperback) 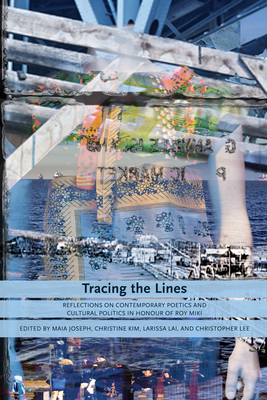 Passionate critic, principled citizen, attentive reader and editor, and energizing teacher - Roy Miki is all these and more, a poet whose -writing articulates a moving body of work. The two main areas of his passionate research and writing - social critique and poetics - inform each other in these essays compiled to mark a milestone in the life of an important public intellectual. Contributors from across North America take Miki's literary and artistic achievements as a starting point for analytical and creative reflections on key artistic, social and political movements of the -second half of the 20th century. Essays on poetics by Daphne Marlatt, Fred Wah, George Bowering, and Michael Barnholden, among others, explore topics from voice, to love, to translation. Mona Oikawa, Dave Gaertner, Phinder Dulai, and Cindy Mochizuki write on social justice, placing Miki's redress work in relation to the politics and art of other historical reparations. Ashok Mathur, Aayaka Yoshimizu, Mark Nakada, David Fujino, and Hiromi Goto present -various views of biotext, a term introduced by George Bowering in the late 1980s that refers to autobiographical text in between poetry and fiction. Jerry Zaslove, Susan Crean, Alessandra Capperdoni, and Smaro Kamboureli discuss the public intellectual's relationship to institutions from the university to city hall. The collection ends with an interview with Miki on interrelations between his photographic and poetic -practices. Miki's history reflects that of the West Coast's literary world. Not only did he found the influential literary journal West Coast Line, but he has researched and written works on poets Roy Kiyooka, George Bowering, and bpNichol. Miki taught many of the poets and academics now working and writing on the West Coast.

Maia JosephMaia Joseph is a sessional lecturer in the Department of English at the University of British Columbia. Her research focuses on Canadian urban literature, urbanism and regionalism, the ethics and politics of artistic practice, and the interdisciplinary theorization of space and community. Her PhD dissertation examines literary responses to the recent (and ongoing) redevelopment of Vancouver's downtown core. Christine KimChristine Kim is an assistant professor of English at Simon Fraser University. Her teaching and research focus on Asian North American literature and theory, contemporary Canadian literature, feminist theory, print publics, and diasporic writing. Recent essays have appeared or are forthcoming in Mosaic, Open Letter, and Essays in Canadian Literature. She is currently working on two book-length projects titled From Multiculturalism to Globalization: The Cultural Politics of Asian North American Writing and Shaping Fiction: Contemporary Feminist Publics in Canada. Larissa LaiLarissa Lai is an author and assistant professor of English at the University of British Columbia. Her first novel, When Fox Is a Thousand (Press Gang, 1995; Arsenal Pulp, 2004), was shortlisted for the Chapters/Books in Canada First Novel Award. Her second novel, Salt Fish Girl (Thomas Allen Publishers, 2002), was shortlisted for the Sunburst Award, the Tiptree Award, and the City of Calgary W.O. Mitchell Award. In 2004, West Coast Line published a special issue focused on her work. She has been the Markin-Flanagan writer-in-residence at the University of Calgary (1997-8), and writer-in-residence in the English Department at Simon Fraser University (2006). sybil unrest, her collaborative long poem with Rita Wong, was published by Line Books in 2009. Eggs in the Basement, a long poem based on a vocabulary exhaustion exercise, surprised its writer by telling the story of Moses and Monotheism. It was published by Nomados, also in 2009, and was shortlisted for the bpNichol Chapbook Award. Lai's first solo full-length poetry book, Automaton Biographies (Arsenal Pulp, 2009), was a finalist for the Dorothy Livesay Poetry Prize. Chris LeeChris Lee is assistant professor of English at the University of British Columbia, teaching and researching Asian American literatures and cultures, Asian Canadian Studies, American Studies (with a focus on race/ethnicity and transnationalism), critical and literary theory, and aesthetic philosophy. He is the author The Semblance of Identity: Aesthetic Mediation in Asian American Literature (Stanford University Press, 2012).