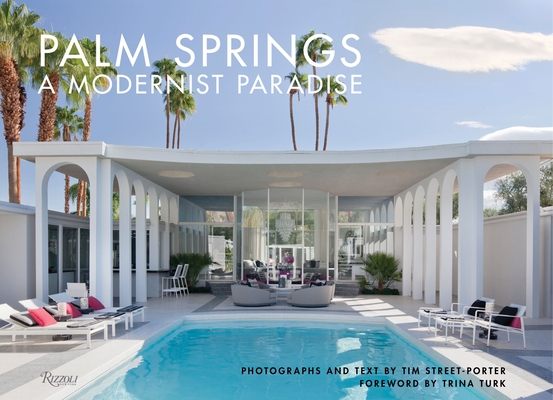 Since Gary Cooper built one of the first modernist houses in Palm Springs in the 1930s, this desert oasis has entranced Hollywood. A mecca for the international jet set that lured Frank Sinatra, Walter Annenberg, and others, Palm Springs came into its own architecturally as a haven for visionary modernists such as Richard Neutra, who were practicing the International Style in Los Angeles. The architectural legacy remains unsurpassed for its originality and influence, and recently many of the city’s modernist residential treasures have been restored.

In original new photography, Palm Springs captures the allure of this famed modernist destination. The book profiles outstanding examples such as the Annenberg Estate, the Ford House, and the Kaufmann House, shown in their splendor, as well as today’s restorations by top interior designers such as Martyn Lawrence Bullard and fashion designer Trina Turk. A resource section provides modernist furnishing stores and other points of interest.

Architecture and design photographer Tim Street-Porter has authored and photographed many books, including L.A. Modern. He is a contributor to lifestyle and design magazines. Fashion and housewares designer Trina Turk has a modernist getaway, “Ship of the Desert,” in Palm Springs.

"For those in love with mid-century modern architecture and its fabled houses in Palm Springs, this is the book for you. Tim Street-Porter has captured the allure of the city as a modernist destination in his inimitable style that makes this world come alive."
—California Homes

"Through Street-Porter’s lens, such iconic homes as the Annenberg Estate, Ford House, and Kaufmann House become more visible than ever before. The work on these and other houses by the likes of interior designer Martyn Lawrence Bullard (who has been featured in MILIEU) and fashion designer Trina Turk shows the degree to which these houses are open to interpretation."
—Milieu

“His photographs capture not only the beauty of the architecture but also the homeowners’ passions, the energy of the spaces and how they are lived in.”
—1st Dibs