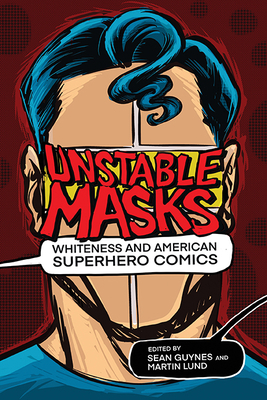 A CHOICE Outstanding Academic Title for 2020

In Unstable Masks: Whiteness and American Superhero Comics, Sean Guynes and Martin Lund bring together a series of essays that contextualize the histories and stakes of whiteness studies, superhero comics, and superhero studies for academics, fans, and media-makers alike. The volume illustrates how the American comic book superhero is fundamentally a figure of white power and white supremacy and ultimately calls for diversity in superhero comics as well as a democratized media culture.
Contributors not only examine superhero narratives but also delve into the production, distribution, audience, and reception of those narratives, highlighting the imbrication of forces that have helped to create, normalize, question, and sometimes even subvert American beliefs about whiteness and race. Unstable Masks considers the co-constitutive nature of identity, representation, narrative, production and consumption, and historical and cultural contexts in forging the stereotypes that decide who gets to be a superhero and who gets to be American on the four-color pages of comic books.

Sean Guynes is a PhD candidate in twentieth-century American Literature and Culture at Michigan State University. Martin Lund is Senior Lecturer at the Department of Society, Culture and Identity at Malmö University.

“This is a fascinating collection; taken together, this edited volume is an impressive consideration of the superhero genre, those who created these characters, and the audiences who consume and interact with these ideas.” —Lily Goren, New Books Network

“The scholars in this book powerfully state that equality is not about changing ‘comic book’ colors but dismantling a racial ideology that has penetrated the core of American nationalism, industry, and culture.” —Enrique García author of The Hernandez Brothers: Love, Rockets, and Alternative Comics

“Unstable Masks should be read cover to cover. In addition to bringing together some extremely strong essays on comic book superheroes, the collection works well to depict the dangers inherent within our predominantly white cultural constructions of heroism.” —Terrence Wandtke author of The Dark Night Returns: The Resurgence of Crime Comics