The Generalship of Muhammad: Battles and Campaigns of the Prophet of Allah (Paperback) 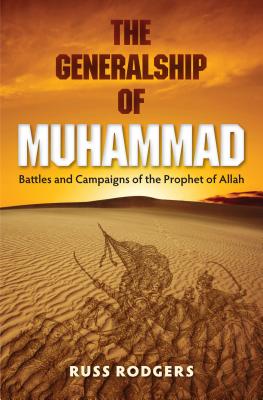 His campaigns, military thought, and insurgent strategy"An excellent analysis of Muhammad as a general, placing his battles within the context of military history, and a good introduction to the life of the founder of Islam."--David Cook, author of Understanding Jihad"Provides an essential understanding to those wanting to know the history that shapes modern insurgencies."--Maj. Christopher Johnson, U.S. Army, policy advisor to the Deputy Assistant Secretary of DefenseThere are many biographies of the Prophet, and they tend to fall into three categories: pious works that emphasize the virtues of the early Islamic community, general works for non-Muslim or non-specialist readers, and source-critical works that grapple with historiographical problems inherent in early Islamic history. In The Generalship of Muhammad, Russ Rodgers charts a new path by merging original sources with the latest in military theory to examine Muhammad's military strengths and weaknesses. Incorporating military, political, and economic analyses, Rodgers focuses on Muhammad's use of insurgency warfare in seventh-century Arabia to gain control of key cities such as Medina. Seeking to understand the operational aspects of these world-changing battles, he provides battlefield maps and explores the supply and logistic problems that would have plagued any military leader at the time. Rodgers explains how Muhammad organized his forces and gradually built his movement against sporadic resistance from his foes. He draws from the hadith literature to shed new light on the nature of the campaigns. He examines the Prophet's intelligence network and the employment of what would today be called special operations forces. And he considers the possibility that Muhammad received outside support to build and maintain his movement as a means to interdict trade routes between the Byzantine Empire and the Sasanid Persians.

Russ Rodgers is a command historian with the U.S. Army and the author of Fundamentals of Islamic Asymmetric Warfare.