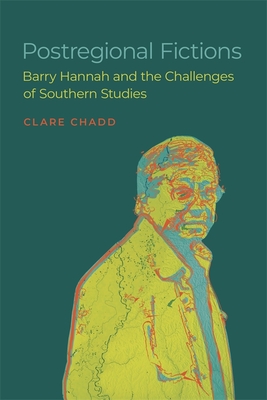 Drawing from recent debates about the validity of regional studies and skepticism surrounding the efficacy of the concept of authenticity, Clare Chadd's Postregional Fictions focuses on questions of southern regional authenticity in fiction published by Barry Hannah from 1972 to 2001. The first monograph on the Mississippi author's work to appear since his death, this study considers the ways in which Hannah's novels and short stories challenge established conceptual understandings of the U.S. South.

Hannah's writing often features elements of metafiction, through which the putative sense of "southernness" his stories dramatize is complicated by an intense self-reflexivity about the extent to which a sense of place has never been foundational or essential but has always been constructed and performed. Such texts locate a productive terrain between the local and the global, with particular relevance for critical apprehensions of the post-South and postsouthern literature. Offering sustained close readings of selected stories, and focusing especially on Hannah's late work, Chadd argues that his fiction reveals the region constantly shifting in a process of mythmaking, dialogue, and performance. In turn, she uses Hannah's work to suggest how notions of the "South" and "southernness" might survive the various deconstructive approaches leveled against them in recent decades of southern studies scholarship. Rather than seeing an impasse between the regional and the global, Chadd's reading of Hannah shows the two existing and flourishing in tandem. In Postregional Fictions, Chadd offers a new interpretation of Hannah based on an appreciation of the vital intersection of southern and postmodern elements in his work.

Clare Chadd holds a PhD from the School of Literatures, Languages, and Cultures at the University of Edinburgh.