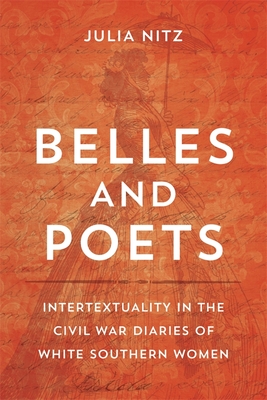 In Belles and Poets, Julia Nitz analyzes the Civil War diary writing of eight white women from the U.S. South, focusing specifically on how they made sense of the world around them through references to literary texts. Nitz finds that many diarists incorporated allusions to poems, plays, and novels, especially works by Shakespeare and the British Romantic poets, in moments of uncertainty and crisis. While previous studies have overlooked or neglected such literary allusions in personal writings, regarding them as mere embellishments or signs of elite social status, Nitz reveals that these references functioned as codes through which women diarists contemplated their roles in society and addressed topics related to slavery, Confederate politics, gender, and personal identity.

Nitz's innovative study of identity construction and literary intertextuality focuses on diaries written by the following women: Eliza Frances (Fanny) Andrews of Georgia (1840-1931), Mary Boykin Miller Chesnut of South Carolina (1823-1886), Malvina Sara Black Gist of South Carolina (1842-1930), Sarah Ida Fowler Morgan of Louisiana (1842-1909), Cornelia Peake McDonald of Virginia (1822-1909), Judith White Brockenbrough McGuire of Virginia (1813-1897), Sarah Katherine (Kate) Stone of Louisiana (1841-1907), and Ella Gertrude Clanton Thomas of Georgia (1843-1907). These women's diaries circulated in postwar commemoration associations, and several saw publication. The public acclaim they received helped shape the collective memory of the war and, according to Nitz, further legitimized notions of racial supremacy and segregation. Comparing and contrasting their own lives to literary precedents and fictional role models allowed the diarists to process the privations of war, the loss of family members, and the looming defeat of the Confederacy. Belles and Poets establishes the extent to which literature offered a means of exploring ideas and convictions about class, gender, and racial hierarchies in the Civil War-era South. Nitz's work shows that literary allusions in wartime diaries expose the ways in which some white southern women coped with the war and its potential threats to their way of life.

Julia Nitz is a lecturer in Anglo-American cultural studies at Martin Luther University of Halle-Wittenberg, Germany. She cofounded the Intercontinental Crosscurrents Network for the study of transatlantic women's networks.