Reconsidering Reagan: Racism, Republicans, and the Road to Trump (Paperback) 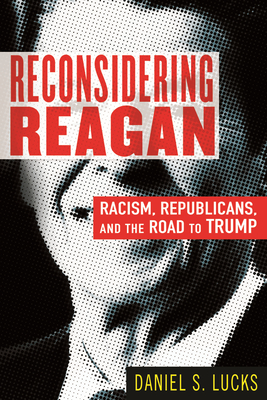 Ronald Reagan is hailed as a transformative president and an American icon, but within his twentieth-century politics lies a racial legacy that is rarely discussed. Both political parties point to Reagan as the “right” kind of conservative but fail to acknowledge his political attacks on people of color prior to and during his presidency. Reconsidering Reagan corrects that narrative and reveals how his views, policies, and actions were devastating for Black Americans and racial minorities, and that the effects continue to resonate today.

Using research from previously untapped resources including the Black press which critically covered Reagan’s entire political career, Daniel S. Lucks traces Reagan’s gradual embrace of conservatism, his opposition to landmark civil rights legislation, his coziness with segregationists, and his skill in tapping into white anxiety about race, riding a wave of “white backlash” all the way to the Presidency. He argues that Reagan has the worst civil rights record of any President since the 1920s—including supporting South African apartheid, packing courts with conservatives, targeting laws prohibiting discrimination in education and housing, and launching the “War on Drugs”—which had cataclysmic consequences on the lives of Black and Brown people.

Linking the past to the present, Lucks expertly examines how Reagan set the blueprint for President Trump and proves that he is not an anomaly, but in fact the logical successor to bring back the racially tumultuous America that Reagan conceptualized.

“Trained as both a lawyer and historian, Lucks steadily builds his case with both a prosecutor’s zeal and a scholar’s fine eye for evidence, causation, and context.”
—Religion Dispatches

“Reconsidering Reagan fills a gap in our national understanding of how white supremacy remains embedded in our laws and policies and how Reagan’s racism left a powerful legacy for Donald Trump.”
—Mary Frances Berry, member and chair, US Commission on Civil Rights, 1980–2004, and author of History Teaches Us to Resist

“Daniel Lucks has written the first sustained and comprehensive treatment of Ronald Reagan’s racial politics. . . . This exploration truly helps us grasp the character and impact of Reagan’s leadership. Those who want to understand how the GOP became the party of Trump should read Reconsidering Reagan.”
—Doug Rossinow, author of The Reagan Era: A History of the 1980s

“Throughout his political career, Ronald Reagan was on the wrong side of almost every civil rights question. Too many accounts of his life have downplayed or ignored his shameful record on civil and human rights. In this powerful and persuasive book, Daniel Lucks shines an honest, uncompromising light on Reagan’s disgraceful legacy and draws a straight line from Reagan to Donald Trump.”
—Robert Mann, author of Becoming Ronald Reagan: The Rise of a Conservative Icon

“Deeply researched and forcefully written, Reconsidering Reagan provides a bracing reexamination of Reagan’s attitudes, rhetoric, and policies toward the question of civil rights and racial injustice. Lucks gives a searing indictment of Reagan’s leadership of the conservative movement that’s sure to revise our understanding of who Reagan was and what he stood for.”
—Matthew Dallek, author of The Right Moment: Ronald Reagan’s First Victory and the Decisive Turning Point in American Politics

“An elegantly written, powerfully argued, and unsparing indictment of Reagan’s racial record across his entire political career. . . . This history ought to trouble the consciences of principled conservatives and should be required reading for all Americans who seek to understand the trajectory of the Republican Party since Reagan.”
—Geoffrey Kabaservice, director of political studies at the Niskanen Center and author of Rule and Ruin: The Downfall of Moderation and the Destruction of the Republican Party, from Eisenhower to the Tea Party