Thirteen Days in September: The Dramatic Story of the Struggle for Peace (Paperback) 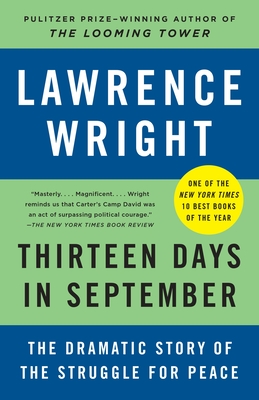 By Lawrence Wright
$17.00
UNAVAILABLE-Possible Reasons: Backordered, Out-of-Stock, or Out-of-Print (But email us to search for a copy.)

From the Pulitzer Prize–winning author of The Looming Tower—a timely revisiting of a diplomatic triumph between two Middle East nations and an inside look at how peace is made. • “Masterly…. Magnificent…. Wright reminds us that Carter’s Camp David was an act of surpassing political courage.” —The New York Times Book Review

In September 1978, three world leaders—Menachem Begin of Israel, Anwar Sadat of Egypt, and U.S. president Jimmy Carter—met at Camp David to broker a peace agreement between the two Middle East nations. During the thirteen-day conference, Begin and Sadat got into screaming matches and had to be physically separated; both attempted to walk away multiple times. Yet, by the end, a treaty had been forged—one that has quietly stood for more than three decades, proving that peace in the Middle East is possible.

Wright combines politics, scripture, and the participants’ personal histories into a compelling narrative of the fragile peace process. Begin was an Orthodox Jew whose parents had perished in the Holocaust; Sadat was a pious Muslim inspired since boyhood by stories of martyrdom; Carter, who knew the Bible by heart, was driven by his faith to pursue a treaty, even as his advisers warned him of the political cost. Wright reveals an extraordinary moment of lifelong enemies working together—and the profound difficulties inherent in the process. Thirteen Days in September is a timely revisiting of this diplomatic triumph and an inside look at how peace is made.

LAWRENCE WRIGHT is a staff writer for The New Yorker, a playwright, and a screenwriter. He is the best-selling author of the novel, The End of October, and ten books of nonfiction, including Going Clear, God Save Texas, and The Looming Tower, winner of the Pulitzer Prize. He and his wife are longtime residents of Austin, Texas.

One of the Best Books of the Year: The Washington Post, The Christian Science Monitor, NPR, Entertainment Weekly, The Economist, The Daily Beast, St. Louis Post-Dispatch

“An illuminating view of a vital event. . . . Both riveting and revealing.” —The Boston Globe

“Mr. Wright displays a sensitive understanding of the region and a fine pen as he sketches in the characters and motivations of the three main players.” —The Economist

“A splendid and suspenseful account of the negotiations that led to the Camp David accord.” —Minneapolis Star Tribune

“A chronicle of diplomatic success. . . . The heart of the book is the daily, sometimes hourly shifts in tactics and postures, stands and counterstands, that unfolded over 13 days in 1978.” —The Plain Dealer

“A unique moment in history superbly captured. . . . A day-by-day account of the tense negotiations that shaped these historic talks. . . . Yet another triumph for Wright.” —Kirkus Reviews (starred)