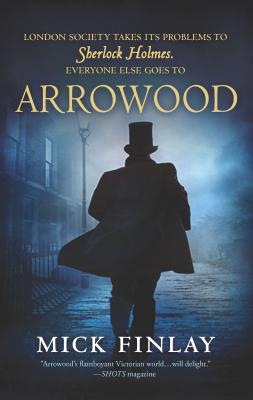 This was a fun and quick read. Mick Finlay does a great job with the location and time period. The dirtiness and grit of London at that time was palpable and reminded me of The Suspicions of Mr Whicher and Oliver Twist. Arrowood is such a character - his ridiculousness and bombast at times made me laugh and at other times I found him as annoying and exhausting as everyone around him did. The actual crime tale itself wasn’t very sophisticated, but enjoyable enough to keep me turning the page to see what came next. I will definitely be interested in reading the next installment.

1895 London is scared. A killer haunts the city's streets; the poor are hungry; crime bosses are taking control; the police force is stretched to the breaking point. The rich turn to Sherlock Holmes, but the celebrated private detective rarely visits the densely populated streets of South London, where the crimes are sleazier and the people are poorer. In the dark corner of Southwark, victims turn to a man who despises Holmes, his wealthy clientele and his showy forensic approach to crime: Arrowood--self-taught psychologist, occasional drunkard and private investigator. When a man mysteriously disappears and Arrowood's best lead is viciously stabbed before his eyes, he and his sidekick, Barnett, face their toughest quest yet: to capture the head of the most notorious gang in London... In the bestselling tradition of Anthony Horowitz and Andrew Taylor, this gloriously dark crime debut will haunt readers long after the final page has been turned.