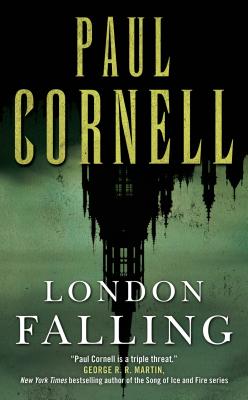 By Paul Cornell
$7.99
OUT-OF-PRINT & UNAVAILABLE! (But email us to search for a used copy.)

This is book number 1 in the The Shadow Police series.

London Falling by Paul Cornell is an urban fantasy twist on the classic police procedural: London cops versus magical creatures of night

Police officers Quill, Costain, Sefton, and Ross know the worst of London—or they think they do. While investigating a mobster's mysterious death, they come into contact with a strange artifact and accidentally develop the Sight. Suddenly they can see the true evil haunting London's streets.

Armed with police instincts and procedures, the four officers take on the otherworldly creatures secretly prowling London. Football lore and the tragic history of a Tudor queen become entwined in their pursuit of an age-old witch with a penchant for child sacrifice. But when London's monsters become aware of their meddling, the officers must decide what they are willing to sacrifice to clean up their city.

Paul Cornell has written episodes of Elementary, Doctor Who, Primeval, Robin Hood and many other TV series, including his own children’s show, Wavelength. He’s worked for every major comics company, including his creator-owned series Saucer State for IDW and This Damned Band for Dark Horse, and runs for Marvel and DC on Batman and Robin, Wolverine and Young Avengers. He’s the writer of the Lychford rural fantasy novellas from Tor.com Publishing. He’s won the BSFA Award for his short fiction, an Eagle Award for his comics, a Hugo Award for his podcast and shares in a Writer’s Guild Award for his Doctor Who. He’s the co-host of Hammer House of Podcast.