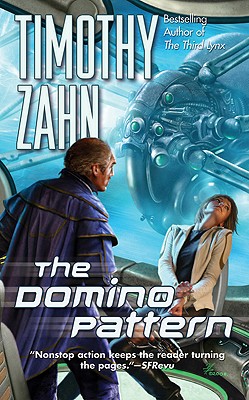 Frank Compton used to be an agent for the security forces of Earth, but that was a piece of cake compared to what he’s had to deal with working for the aliens who run the Quadrail, an interstellar transportation system connecting a dozen civilizations across the galaxy.

He’s been trying to end the domination of an alien lifeform called the Modhri. This enormously powerful creature wants to rule the galaxy by controlling the thoughts of all its citizens. It does so by having parts of itself “infect” others on contact, and act as agents for it without them being aware they’re being manipulated. When Frank and his assistant Bayta journey to investigate a connection between the Modhri and the Filiaelians, they come up against a conspiracy on the Quadrail.

Passengers are being murdered…but something besides murder haunts the Quadrail. A plot is brewing that even the Modhri fears. And once again, Frank and Bayta may be the only ones who can stop it.

“An easy read, the novel pays homage to the noir detective and thriller genres, and Zahn spices his novel with a variety of aliens. Nonstop action keeps the reader turning the pages.” —SFRevu.com on Odd Girl Out

“An inventive plot…. Zahn’s strength is hard science fiction, and he excels at technical description. The comic-book-like nonstop action will attract fans of the genre.” —Romantic Times BOOKreviews on Night Train to Rigel