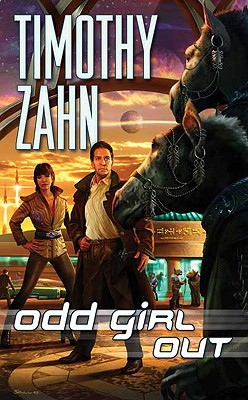 This is book number 3 in the Quadrail SF Thrillers (Paperback) series.

In this noir thriller set on the interstellar Quadrail, former government agent Frank Compton can't catch a break. After a successful mission against the Modhri, the coral polyp-based group mind that is attempting to take over the galaxy, Frank arrives at his New York apartment. A young woman is waiting for him, pointing a gun at his face. She tells him that someone on New Tigris is holding her ten-year-old sister. Compton takes her gun and orders her out, only to be rousted out of bed and accused of her brutal murder.

After Frank's ally Bruce McMicking posts his bail, Frank travels to New Tigris with his assistant, Bayta, and locates the sister, who is part of a key resistance group that is fighting the Modhri throughout the galaxy. Compton must get the girl to a hidden refuge planet via the Quadrail to ensure the continued efforts of the resistance. But can he do it before the Modhri gets to her first?

Compelling characters, hard-boiled sleuthing, and non-stop action make this a hard SF thriller that will grab the reader and not let go until the last page.

Timothy Zahn is the Hugo Award-winning author of more than thirty SF novels, including the Dragonback series, as well as Night Train to Rigel, The Third Lynx, Blackcollar: The Judas Solution and the Dragonback sextet. He has also written the all-time bestselling Star Wars(TM) spinoff novel, Heir to the Empire, and other Star Wars(TM) novels, including the recent Allegiance. He lives in coastal Oregon.