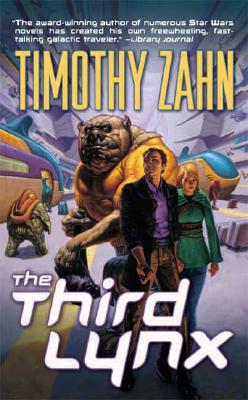 This is book number 2 in the Quadrail SF Thrillers (Paperback) series.

Former government agent Frank Compton foiled a plot to enslave the galaxy in "Night Train to Rigel." But the Modhri, an ancient telepathically linked intelligence, has walkers, unwilling hosts that can be anywhere, anything and anyone. And Compton is the only man who knows how to fight them, as they wage a secret war against the galactic civilizations linked by the Quadrail, the only means of intra-galactic transit.

Accompanied by Bayta, a woman with strange ties to the robot-like Spiders who run the Quadrail, and dogged by special agent Morse who suspects him of murder, Compton races the Modhri from station to station to acquire a set of valuable sculptures from a long-dead civilization. What the Modhri wants with them is anybody's guess, but if Compton can't outwit it, the whole galaxy will find out the hard way.

Timothy Zahn is the New York Times bestselling and Hugo Award- winning author of more than thirty original science fiction novels and dozens of short stories. Dragon and Thief, in his young-adult Dragonback series, was named an ALA Best Book for Young Adults. He is the author of more than a half dozen Star Wars novels, including Heir to the Empire, the bestselling Star Wars spin-off novel of all time. He lives in coastal Oregon.

“An inventive plot…Zahn’s strength is hard science fiction, and he excels at technical description. The comic-book-like nonstop action will attract fans of the genre.” —Romantic Times BOOKreviews on Night Train to Rigel

“Zahn plays out his suspense as deftly as always, building a tense situation and ultimately defusing it in believable and pleasing ways.” —Locus on Manta’s Gift

“Through in-depth characterization, as well as toothsome scientific and political mysteries, Zahn unfolds an intricate tale of adventure sure to please his many fans.” —Publishers Weekly on Angelmass