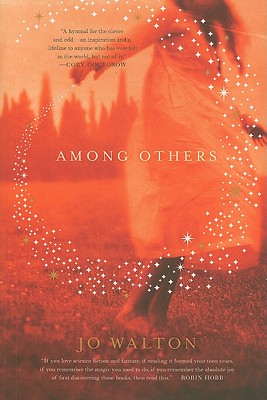 By Jo Walton
UNAVAILABLE AT THIS TIME (Possible reasons: Backordered, Out-of-Stock Indefinitely, or Print-on-Demand only)
OUT OF PRINT

Winner of the 2011 Nebula Award for Best Novel

Winner of the 2012 Hugo Award for Best Novel

Startling, unusual, and yet irresistably readable, Among Others is at once the compelling story of a young woman struggling to escape a troubled childhood, a brilliant diary of first encounters with the great novels of modern fantasy and SF, and a spellbinding tale of escape from ancient enchantment.

Raised by a half-mad mother who dabbled in magic, Morwenna Phelps found refuge in two worlds. As a child growing up in Wales, she played among the spirits who made their homes in industrial ruins. But her mind found freedom and promise in the science fiction novels that were her closest companions. Then her mother tried to bend the spirits to dark ends, and Mori was forced to confront her in a magical battle that left her crippled--and her twin sister dead.

Fleeing to her father whom she barely knew, Mori was sent to boarding school in England–a place all but devoid of true magic. There, outcast and alone, she tempted fate by doing magic herself, in an attempt to find a circle of like-minded friends. But her magic also drew the attention of her mother, bringing about a reckoning that could no longer be put off…

Combining elements of autobiography with flights of imagination in the manner of novels like Jonathan Lethem’s The Fortress of Solitude, this is potentially a breakout book for an author whose genius has already been hailed by peers like Kelly Link, Sarah Weinman, and Ursula K. Le Guin.

JO WALTON's novel "Tooth and Claw "won the World Fantasy Award, and the novels of her Small Change sequence--"Farthing," "Ha'penny," and "Half a Crown"--have won acclaim ranging from national newspapers to the "Romantic Times "Reviewer's Choice Award. A native of Wales, she lives in Montreal.

“A hymnal for the clever and odd—an inspiration and a lifeline to anyone who has ever felt in the world, but not of it.” —Cory Doctorow , New York Times bestselling author of Little Brother

“If you love SF and fantasy, if reading it formed your teen years, if you do remember the magic you used to do, if you remember the absolute joy of first discovering those books, then read this.” —Robin Hobb, New York Times bestselling author of Assassin’s Apprentice

“A lovely story, unlike anything I’ve ever read before: funny, touching, and gently magical.” —Patrick Rothfuss, New York Times bestselling author of The Name of the Wind