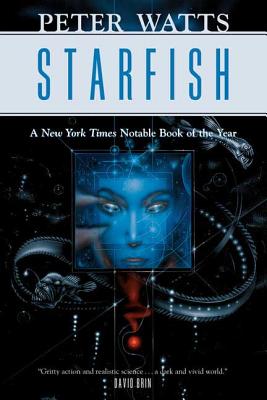 This is book number 1 in the Rifters Trilogy series.

Civilization rests on the backs of its outcasts.

So when civilization needs someone to run generating stations three kilometers below the surface of the Pacific, it seeks out a special sort of person for its Rifters program. It recruits those whose histories have preadapted them to dangerous environments, people so used to broken bodies and chronic stress that life on the edge of an undersea volcano would actually be a step up. Nobody worries too much about job satisfaction; if you haven't spent a lifetime learning the futility of fighting back, you wouldn't be a rifter in the first place. It's a small price to keep the lights going, back on shore.

But there are things among the cliffs and trenches of the Juan de Fuca Ridge that no one expected to find, and enough pressure can forge the most obedient career-victim into something made of iron. At first, not even the rifters know what they have in them—and by the time anyone else finds out, the outcast and the downtrodden have their hands on a kill switch for the whole damn planet...

His work is available in 21 languages, has appeared in over 350 best-of-year anthologies, and been nominated for over 50 awards in a dozen countries. His (somewhat shorter) list of 20 actual wins includes the Hugo, the Shirley Jackson, and the Seiun.

Peter is the author of the Rifters novels (Starfish, Maelstrom) and the Firefall series (Blindsight, Echopraxia).

“No one has taken this premise to such pitiless lengths--and depths as Watts. . . . In a claustrophobic setting enlivened by periodic flashes of beauty and terror, the crew of Beebe Station come across as not only believable but likeable as they fight for equilibrium against their own demons, one another, their superiors and their remorselessly hostile surroundings.” —The New York Times

“Fizzing with ideas, and glued together with dark psychological tension: an exciting debut.” —Kirkus Reviews

“A powerful first novel. . . . A savage, bitter, and often blackly comic vision of the near future . . . Watts has rendered a character whose emotional complexity demands our respect. . . . [The ending] is both startling and oddly satisfying in its earned nihilism. A terrific debut from an author we will be seeing again.” —Edmonton Journal

“Watts' true enemy is human stupidity, the sort of thing that turns children into walking disaster zones, treats adults as interchangeable things, insists that unchecked fertility is a Good Thing, and blindly trusts that our artificially intelligent creations must share our priorities. As Watts develops that point, he tells an absorbing tale set in a bizarre world and hinging upon intriguing technology. He's done his homework well, and it shows.” —Analog