Europe in Flames: The Crisis of the Thirty Years War (Paperback) 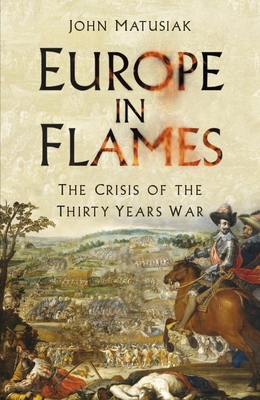 EARLY seventeenth-century Europe was a dangerous place. The resulting Thirty Years War was to claim more lives proportionately than either the First or Second World Wars – not only from battle and the endemic violence of marauding armies, but also from famine and plague. In the wake of events in far off Bohemia in 1618, there ensued a bitter struggle encompassing the entire political and religious future of Europe, and involving in one way or another all the major players of the Continent – from the Habsburg monarchs of Spain and the Holy Roman Empire, to the Bourbon rulers of France, and the renowned King Gustavus Adolphus of Sweden, as well as Denmark, England and, more crucially still, the emerging Dutch Republic of the United Provinces.As the turmoil unfolded, vast mercenary armies exacted an incalculable toll upon helpless civilian populations, while their commanders and the men who equipped them frequently grew rich on the profits, leaving the rulers – to whom they sometimes bore no more than nominal allegiance – perched on the brink of catastrophe. When peace came in 1648, the crisis appeared to have passed, but the underlying tensions were far from wholly resolved. On the contrary, in some cases they were merely suspended or fashioned anew.In Europe in Flames John Matusiak provides a compelling account of this most tumultuous time, exploring the causes, course and outcomes of a conflict that not only produced one of the greatest manmade calamities of its kind, but changed the direction of European history forever.

John Matusiak studied at the universities of London and Sussex before embarking upon a teaching career that eventually spanned more than thirty years. For over a third of that time, he was Head of the History Department at Colchester Royal Grammar School, founded by Henry VIII in 1539. He is the acclaimed author of Henry VIII (THP, 2012), Wolsey (THP, 2013) and The Prisoner King (THP, 2017).