Tudor King in All but Name: The Life of Edward Seymour (Paperback) 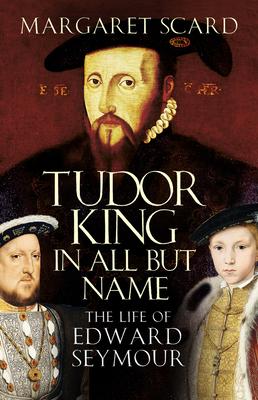 By Margaret Scard
$25.95
UNAVAILABLE-Possible Reasons: Backordered, Out-of-Stock, or Out-of-Print (But email us to search for a copy.)

In January 1547 Henry VIII lay dying. His heir, Edward VI, was just 9 years old and all England waited expectantly to see who would hold the reins of power until he came of age. Within days of Henry’s death, the privy council overturned the terms of his will and Edward Seymour, Duke of Somerset, was named Lord Protector.For nearly three years, Somerset was ‘king in all but name’, but, though he was a skilled soldier and leader on the battlefield, Somerset’s political skills were not so well-honed. His single-mindedness and overbearing attitude towards the privy councillors alienated the very men whose support he most needed. When they lost patience with him, the scene was set for conflict.To the people Edward Seymour was the ‘Good Duke’. To his fellow councillors he was a traitor. This is a story of Tudor ambition, power and the ultimate price of failure.

MARGARET SCARD’s interest in the Tudor period is focused particularly on the court life and politics of sixteenth century England. This is her second book and the extensive research it entailed has been underpinned by study at Oxford University. She is the author of Tudor Survivor: The Life and Times of William Paulet, also published by The History Press.