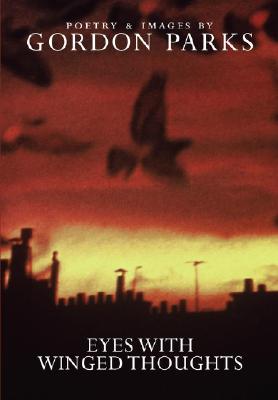 By Gordon Parks
UNAVAILABLE AT THIS TIME (Possible reasons: Backordered, Out-of-Stock Indefinitely, or Print-on-Demand only)
OUT OF PRINT

In "Eyes with Winged Thoughts, " the forty-four photographs and fifty-eight poems, reflecting on his long and extraordinary life, offer a rare glimpse of his thoughts and feelings about everything from romantic love to the Iraq war and the passing of Pope John Paul II.

He has done it all. Gordon Parks's life is an astonishing litany of firsts: in the 1940s he was the first African-American photographer to work for the Farm Security Administration and for "Vogue" and "Life" magazines; in the 1960s he would become the first African-American director of a major motion picture. A dominating figure in contemporary American culture, he is an artist of uncompromising vision and creativity.

In 2002 Parks received the Jackie Robinson Foundation Lifetime Achievement Award and was inducted into the International Photography Hall of Fame, just the latest in a series of honors that began when he received a prestigious Julius Rosenwald Fellowship in 1941 and which now includes an Emmy, a National Medal of the Arts, and over fifty honorary doctorates. Now in his nineties, he could easily rest on his laurels, but the luminous photographs on display in "Eyes with Winged Thoughts" and the poems -- some meditative and lyrical, some raw with emotion about the war in Iraq and the tragedy of the tsunami -- show that he is still a true American Renaissance man.