The Devil's Trick: How Canada Fought the Vietnam War (Hardcover) 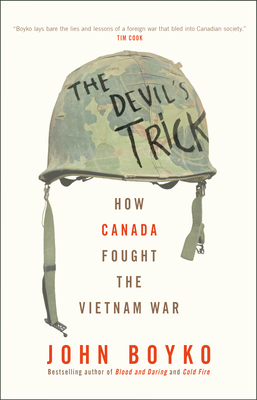 Forty-five years after the fall of Saigon, John Boyko brings to light the little-known story of Canada's involvement in the American War in Vietnam.

Through the lens of six remarkable people, some well-known, others obscure, bestselling historian John Boyko recounts Canada's often-overlooked involvement in that conflict as peacemaker, combatant, and provider of weapons and sanctuary.

When Brigadier General Sherwood Lett arrived in Vietnam over a decade before American troops, he and the Canadians under his command risked their lives trying to enforce an unstable peace while questioning whether they were merely handmaidens to a new war. As American battleships steamed across the Pacific, Canadian diplomat Blair Seaborn was meeting secretly in Hanoi with North Vietnam’s prime minister; if American leaders accepted his roadmap to peace, those ships could be turned around before war began. Claire Culhane worked in a Canadian hospital in Vietnam and then returned home to implore Canadians to stop supporting what she deemed an immoral war. Joe Erickson was among 30,000 young Americans who changed Canada by evading the draft and heading north; Doug Carey was one of the 20,000 Canadians who enlisted with the American forces to serve in Vietnam. Rebecca Trinh fled Saigon with her husband and young daughters, joining the waves of desperate Indochinese refugees, thousands of whom were to forge new lives in Canada.

Through these wide-ranging and fascinating accounts, Boyko exposes what he calls the Devil’s wiliest trick: convincing leaders that war is desirable, persuading the public that it is acceptable, and telling combatants that the deeds they carry out and the horrors they experience are normal, or at least necessary. In uncovering Canada’s side of the story, Boyko reveals the many secret and forgotten ways that Canada not only fought the war but was forever shaped by its lessons and lies.

JOHN BOYKO is the author of seven previous books, including Cold Fire: Kennedy's Northern Front, which was shortlisted for the Dafoe Literary Award for non-fiction, and Blood and Daring: How Canada Fought the American Civil War and Forged a Nation, which was shortlisted for a Governor General's Literary Award for its English-to-French translation, Voisins et ennemis. La guerre de Sécession et l'invention du Canada. Boyko is an op-ed contributor to the Globe and Mail, Calgary Herald, Ottawa Citizen, Montreal Gazette, Maclean's, and more. He also writes entries for the Canadian Encyclopedia.

He has addressed audiences across Canada and appeared on radio and television discussing his books and various historical and current political issues. The Globe and Mail has called Boyko "a distinguished scholar of Canadian political history" and the Winnipeg Free Press has praised his "encyclopaedic knowledge of Canadian history."

Boyko has earned degrees from Trent, Queen's and McMaster universities, served on and chaired many boards, and been elected to municipal office. He lives in Lakefield, Ontario.

PRAISE FOR THE DEVIL'S TRICK

“Among the wealth of Vietnam War analysis, John Boyko’s The Devil’s Trick: How Canada Fought the Vietnam War deserves a respected place. . . . This book has many strengths. And, if a Canadian historian, reporter, Asia watcher, or diplomat in training ever needed a primer on placing the war in its time, Boyko’s first thousand words do the trick.” —Ted Barris, Canada’s History

“[A] compelling study. . . . John Boyko is an impressive historian with seven well-received books to his credit. . . . [A]mbitious and far-reaching . . . [The Devil’s Trick] skillfully unfolds a complex narrative. . . . I came away not only impressed by the power of the narratives he creates but by his sensitive handling of issues that continue to affect us. . . . [A] powerful, thought-provoking book.” —The Peterborough Examiner

“In his trademark style, Boyko delivers another fast-paced narrative, exploring Canada’s contentious and contested involvement in the Vietnam War. . . . In this revealing book, Boyko lays bare the lies and lessons of a foreign war that bled into Canadian society, and which still remain relevant.” —Tim Cook, author of The Fight for History

“[E]ngaging. . . . Cold Fire is a well-researched political page-turner featuring penetrating portraits of the key players, behind-the-scenes manoeuvring, and backbiting comments. Boyko also shows, as others have, that in the most anxious days of the Cold War, Canada was one of America’s most trusted allies, yet Canadian leaders could not be pushed around or taken for granted.” —Allan Levine, Maclean’s

“Boyko’s detail and fluid storytelling make some of what is now ancient history come alive. . . . This book pumps life into the people and times and is an object lesson for current politicians, diplomats and followers of the news. And it busts myths.” —Allan Bonner, author of Political Conventions, Troy Media

“Clearly, Boyko has done his homework. Heavily footnoted and brimming with quotes from primary sources (talking both on and off the record), Cold Fire ably recreates the tense and dangerous era of the early 1960s. Conversational accounts offer a compelling fly-on-the-wall viewpoint. . . . There are also a few bombshells, as well as some refreshingly assertive analysis. . . . Cold Fire illustrates a crucially important pivot point in Canadian politics—and makes for a great cautionary tale.” —The Georgia Straight