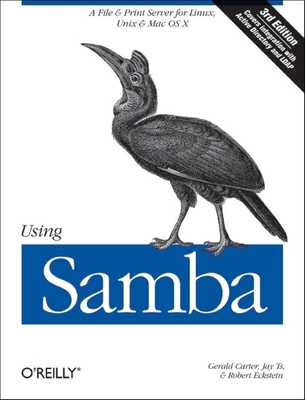 This book is the comprehensive guide to Samba administration, officially adopted by the Samba Team. Wondering how to integrate Samba's authentication with that of a Windows domain? How to get Samba to serve Microsoft Dfs shares? How to share files on Mac OS X? These and a dozen other issues of interest to system administrators are covered. A whole chapter is dedicated to troubleshooting

The range of this book knows few bounds. Using Samba takes you from basic installation and configuration -- on both the client and server side, for a wide range of systems -- to subtle details of security, cross-platform compatibility, and resource discovery that make the difference between whether users see the folder they expect or a cryptic error message.

The current edition covers such advanced 3.x features as:


Samba is a cross-platform triumph: robust, flexible and fast, it turns a Unix or Linux system into a file and print server for Microsoft Windows network clients. This book will help you make your file and print sharing as powerful and efficient as possible. The authors delve into the internals of the Windows activities and protocols to an unprecedented degree, explaining the strengths and weaknesses of each feature in Windows domains and in Samba itself.

Whether you're playing on your personal computer or an enterprise network, on one note or a full three-octave range, Using Samba will give you an efficient and secure server.

Gerald (Jerry) Carter received his Masters degree in Computer Science from Auburn University, where he continues to pursue his PhD. He has been a member of the Samba development Team since 1998 and his involvement with Unix systems and network administration of UNIX began in 1995. Jerry currently works for HP, working on embedded printing appliances. Having published articles with various web-based magazines, he teaches instructional courses as a consultant for several companies and conferences.Jay Ts is a system administrator and programmer with many years of experience working with several versions of Unix and other operating systems. Nowadays he works as an independent consultant out of his home in Sedona, Arizona.Robert Eckstein has worked with Java since its first release. In aprevious life, he has been an editor for O'Reilly Media, Inc. and aprogrammer for Motorola's cellular technology division. He hasauthored, co-authored, or edited a number of books, including Java Swing, JavaEnterprise Best Practices, Using Samba, XML Pocket Reference, andWebmaster in a Nutshell. In his spare time he has been known to tinkerwith filmmaking and digital photography, as well as collecting vintagevideo game consoles. He currently lives in Austin, Texas with his wifeMichelle, his children Lauren and Nathan, and their talking dogGinger.