Boomers: The Men and Women Who Promised Freedom and Delivered Disaster (Hardcover) 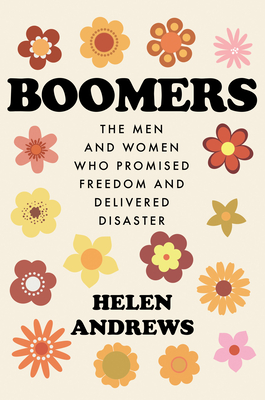 Comments: "Every generation is dealt its own challenges and handles them as well as it can. The boomers were dealt an uncommonly good hand, which makes it truly incredible that they should have screwed up so badly." This is how Helen Andrews' preface begins her intelligently scathing essays on 6 different champions of the Baby Boomer generation.
I originally picked up the book only because I'm a huge Aaron Sorkin fan. I was not ready to love Helen Andrews' critical analysis here as much as I did!
Andrews doesn't villainize anybody, but speaks the truth in love, synthesizing things that even the brightest boomer couldn't have foreseen about their own generation's "dismal legacy."

"Baby Boomers (and I confess I am one): prepare to squirm and shake your increasingly arthritic little fists. For here comes essayist Helen Andrews."--Terry Castle

With two recessions and a botched pandemic under their belt, the Boomers are their children's favorite punching bag. But is the hatred justified? Is the destruction left in their wake their fault or simply the luck of the generational draw?

In Boomers, essayist Helen Andrews addresses the Boomer legacy with scrupulous fairness and biting wit. Following the model of Lytton Strachey's Eminent Victorians, she profiles six of the Boomers' brightest and best. She shows how Steve Jobs tried to liberate everyone's inner rebel but unleashed our stultifying digital world of social media and the gig economy. How Aaron Sorkin played pied piper to a generation of idealistic wonks. How Camille Paglia corrupted academia while trying to save it. How Jeffrey Sachs, Al Sharpton, and Sonya Sotomayor wanted to empower the oppressed but ended up empowering new oppressors.

Ranging far beyond the usual Beatles and Bill Clinton clichés, Andrews shows how these six Boomers' effect on the world has been tragically and often ironically contrary to their intentions. She reveals the essence of Boomerness: they tried to liberate us, and instead of freedom they left behind chaos.

Helen Andrews is a senior editor at The American Conservative. Previously, she was the managing editor of the Washington Examiner magazine and a 2018 Robert Novak Journalism Fellow. Her writing has appeared in The New York Times, First Things, Claremont Review of Books, The Hedgehog Review, American Affairs, and National Review. She lives in Washington, D.C.

“Helen Andrews has written the first book to treat the Baby Boomers not just as youthful dreamers but also as ruthless wielders of power, and to account for what their dreams have cost us. A groundbreaking reassessment of the last generation by one of the bravest and best writers of this one.”—Christopher Caldwell, author of The Age of Entitlement

“Baby boomers (and I confess I am one): prepare to squirm and shake your increasingly arthritic little fists. For here comes essayist Helen Andrews, incendiary new critic of left-wing pieties, youthful scourge of 'disastrous' sixties idealism and its legacies, and all-round millennial conservative whippersnapper par excellence. Even when infuriating or wrong—and Andrews can be both—she is irresistibly intelligent, writes like a dream, and asks questions so uncomfortable and fundamental that the bravery, honesty, and moral seriousness of her approach cannot be gainsaid. Boomers—shall we go there?—is an essential book for our woebegotten time. Excuse me, folks, while I kiss the sky.”—Terry Castle, Walter A. Haas Professor of the Humanities at Stanford University, author of The Professor

“As a committed but self-hating Baby Boomer, I've read Helen Andrews' work with an uneasy mixture of trepidation and admiration—admiration because she combines a luminous intelligence with a wit that's as glistening and sharp as a straight razor, and trepidation because I realize she is about to turn those weapons on me and my kind. We deserve it, of course, but that doesn't make it any less scary.”—Andrew Ferguson, staff writer at The Atlantic, author of Crazy U and Land of Lincoln