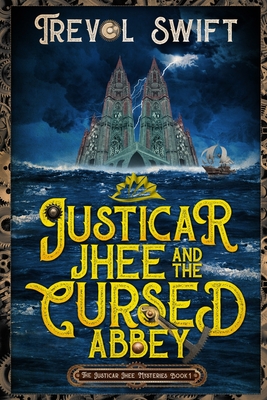 Death stalks the abbey at Tranquility Bridge... Only, Justicar Jhee, a magic-wielding sleuth can stop it.

On Jhee's way from her remote home district to the Imperial capital, a wild wave damages her polygamous household's yacht, and they are forced to halt for repairs at a secluded abbey.

With communications disrupted, the abbess invites them to stay but soon their visit takes a frightening turn when Jhee sees a masked figure acting suspiciously.

Dismissed as ghosts by the others, Jhee's natural instinct is to investigate. She discovers that the previous abbess and several novices had died under suspicious circumstances and rumors abound of an ancient cult, risen once more and led by a figure called the Mist Abbess.

As she digs ever deeper into the mystery she discovers even more shocking revelations, with refugees from the sea going missing and smugglers, human traffickers and anarchists operating at will.

There is more to the abbey than meets the eye and soon Jhee's life is threatened by the malevolence that stalks its confines. Trapped by circumstances and with no way for help to arrive, can she uncover the truth before she or her spouses become the next victims of the sinister forces that lurk just out of sight?