A Spy Among Friends: Kim Philby and the Great Betrayal (CD-Audio) 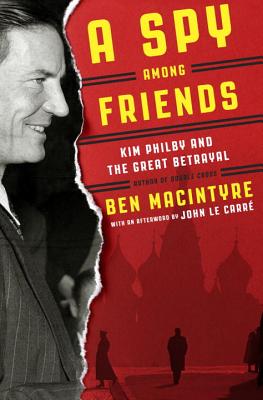 By Ben Macintyre, John le Carré (Afterword by), John Lee (Read by)
UNAVAILABLE AT THIS TIME (Possible reasons: Backordered, Out-of-Stock Indefinitely, or Print-on-Demand only)
OUT OF PRINT


Kim Philby was the greatest spy in history, a brilliant and charming man who rose to head Britain’s counterintelligence against the Soviet Union during the height of the Cold War—while he was secretly working for the enemy. And nobody thought he knew Philby like Nicholas Elliott, Philby’s best friend and fellow officer in MI6. The two men had gone to the same schools, belonged to the same exclusive clubs, grown close through the crucible of wartime intelligence work and long nights of drink and revelry. It was madness for one to think the other might be a communist spy, bent on subverting Western values and the power of the free world.

But Philby was secretly betraying his friend. Every word Elliott breathed to Philby was transmitted back to Moscow—and not just Elliott’s words, for in America, Philby had made another powerful friend: James Jesus Angleton, the crafty, paranoid head of CIA counterintelligence. Angleton's and Elliott’s unwitting disclosures helped Philby sink almost every important Anglo-American spy operation for twenty years, leading countless operatives to their doom. Even as the web of suspicion closed around him, and Philby was driven to greater lies to protect his cover, his two friends never abandoned him—until it was too late. The stunning truth of his betrayal would have devastating consequences on the two men who thought they knew him best, and on the intelligence services he left crippled in his wake.

Told with heart-pounding suspense and keen psychological insight, and based on personal papers and never-before-seen British intelligence files, A Spy Among Friends is Ben Macintyre’s best book yet, a high-water mark in Cold War history telling.


From the Hardcover edition.

BEN MACINTYRE is a writer-at-large for The Times of London and the bestselling author of Double Cross, Operation Mincemeat, Agent Zigzag, The Napoleon of Crime, and Forgotten Fatherland, among other books. Macintyre has also written and presented BBC documentaries of the wartime espionage trilogy.

An Amazon Best Book of the Year

“Macintyre has produced more than just a spy story. He has written a narrative about that most complex of topics, friendship...When devouring this thriller, I had to keep reminding myself it was not a novel. It reads like a story by Graham Greene, Ian Fleming, or John Le Carré, leavened with a dollop of P.G. Wodehouse...[Macintyre] takes a fresh look at the grandest espionage drama of our era.”—Walter Isaacson, New York Times Book Review

“Macintyre does here what he does best — tell a heck of a good story. A Spy Among Friends is hands down the most entertaining book I’ve reviewed this year.” —Boston Globe

“Macintyre is a superb writer, with an eye for the telling detail as fine as any novelist’s…A Spy Among Friends is as suspenseful as any novel, too, as the clues tighten around Philby’s guilt.”—Dallas Morning News

“By now, the story of British double agent Harold ‘Kim’ Philby may be the most familiar spy yarn ever, fodder for whole libraries of histories, personal memoirs and novels. But Ben Macintyre manages to retell it in a way that makes Philby’s destructive genius fresh and horridly fascinating.”—David Ignatius, Washington Post

“A Spy Among Friends is a rollicking book. Mr. Macintyre is full of pep and never falters in the headlong rush of his narrative.”—Wall Street Journal

“Excellent...I was thoroughly engrossed in this book, beginning to end. It has all the suspense of a good spy novel, and its characters are a complex mix of charm, eccentricity, intelligence and wit. And it offers a great--and mostly troubling—insight into the behind-the-scenes workings of those we entrust with the most important of our political and military secrets.”—The Huffington Post

“Working with colorful characters and an anything-can-happen attitude, Macintyre builds up a picture of an intelligence community chock-full of intrigue and betrayal, in which Philby was the undisputed king of lies…Entertaining and lively, Macintyre’s account makes the best fictional thrillers seem tame.” —Publishers Weekly [starred]

“Gripping and as well-crafted as an episode of Smiley’s People, full of cynical inevitability, secrets, lashings of whiskey and corpses.” —Kirkus Reviews [starred]

“Ben Macintyre (Double Cross) offers a fresh look at master double agent Kim Philby…Fans of James Bond will enjoy this look into the era that inspired Ian Fleming's novels, but any suspense-loving student of human nature will be shocked and thrilled by this true narrative of deceit.”—Shelf Awareness [starred]

“Ben Macintyre has a knack for finding the most fascinating storylines in history. He has done it again, with this spellbinding tale of espionage, friendship, and betrayal. Written with an historian’s fidelity to fact and a novelist’s eye for character, A Spy Among Friends is one terrific book.” —David Grann, New York Times bestselling author of The Lost City of Z

“Ben Macintyre is one of the most gifted espionage writers around. In A Spy Among Friends he weaves an absorbing tale of deceit and duplicity, of treason and betrayal. With exquisite detail and masterful control, Macintyre unveils the dark and treacherous interior worlds in which spies live.” —Annie Jacobsen, author of Area 51 and Operation Paperclip

“In this spellbinding account of friendship and betrayal, Ben Macintyre masterfully describes how the Cambridge-educated Kim Philby evaded justice by exploiting the incestuous snobbery of the British old-boy network, which refused to believe that one of its own could be a major Soviet spy. As riveting as Macintyre’s earlier books were, this searing portrait of Britain's ruling class is even better.” —Lynne Olson, bestselling author of Citizens of London and Those Angry Days

“Ben Macintyre has written a truly fabulous book about the "fabulous" Kim Philby—the suave, dedicated, and most intriguing spy of the entire Cold War era. Philby and his colorful Cambridge comrades are endlessly fascinating. But Macintyre tells the devastating story in an entirely new fashion, with new sources and an astonishing intimacy.”
—Kai Bird, Pulitzer Prize-winning biographer and author of The Good Spy: The Life and Death of Robert Ames

“I have seldom had a better read than A Spy Among Friends.  It reads like a thriller, a thriller of a peculiarly intricate and at times frightening sort, but you just can’t stop reading it.”  —Lady Antonia Fraser, author of Marie Antoinette: The Journey

“The Philby story has been told many times, but never with such sensitivity. Almost inadvertently, Ben Macintyre, a Times columnist, provides a devastating critique of the British class system and the disasters that result when people assume they know people… A Spy Among Friends is an extraordinary book about a sordid profession in which the most important attribute is the ability to lie…. Macintyre’s focus on friendship brings an intimacy to this book that is missing from the cardboard stereotypes that populate spy novels and conventional espionage histories…I’m not a lover of spy novels, yet I adored this book.” –The Times of London

“Macintyre writes with the diligence and insight of a journalist, and the panache of a born storyteller, concentrating on Philby's friendship with and betrayal of Elliott and of Angleton, his pathetically dedicated admirer at the top of the CIA. Macintyre's account of the verbal duel between Elliott and Philby in their final confrontation in Beirut in 1963 is worthy of John le Carré at his best.”–The Guardian

“A Spy Among Friends, a classic spookfest, is also a brilliant reconciliation of history and entertainment…An unputdownable postwar thriller whose every incredible detail is fact not fiction…[a] spellbinding narrative…Part of the archetypal grip this story holds for the reader is as a case study in the existential truth that, in human relations, the Other is never really knowable. For both, the mask became indistinguishable from reality…A Spy Among Friends is not just an elegy, it is an unforgettable requiem.” –The Observer

“Ben Macintyre’s bottomlessly fascinating new book is an exploration of Kim Philby’s friendships, particularly with Nicholas Elliott… Other books on Philby may have left one with a feeling of grudging respect, but A Spy Among Friends draws out his icy cold heart…This book consists of 300 pages; I would have been happy had it been three times as long.” –The Mail on Sunday

“Such a summary does no justice to Macintyre's marvellously shrewd and detailed account of Philby's nefarious career. It is both authoritative and enthralling... The book is all the more intriguing because it carries an afterward by John le Carré.” –The New Statesman

“No one writes about deceit and subterfuge so dramatically, authoritatively or  perceptively [as Ben Macintyre]. To read A Spy Among Friends is a bit like climbing aboard a runaway train in terms of speed and excitement–except that Macintyre knows exactly where he is going and is in total control of his material.” –The Daily Mail

“Philby's story has been told many times before–both in biography and most notably in John le Carre's fictional masterpiece Tinker Tailor Soldier Spy–but never in such exhaustive detail and with such panache as in Ben MacIntyre's brilliant, compulsive A Spy Among Friends… Reads like fiction, which is testament to the extraordinary power of the story itself but also to the skills of the storyteller…One of the best real-life spy stories one is ever likely to read.” –The Express

“Ben Macintyre has written an engaging book on a tantalising and ultimately tragic subject. If it starts as a study of friendship, it ends as an indictment.” –The Spectator


From the Hardcover edition.