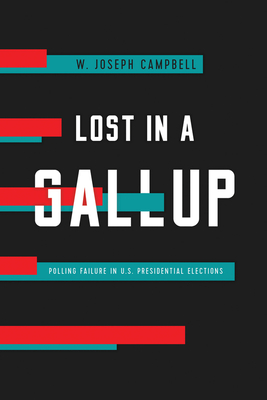 A sweeping look at the messy and contentious past of US presidential pre-election polls and why they aren’t as reliable as we think.

Polls in U.S. presidential elections can and do get it wrong—as surprising outcomes in 2020, in 2016, in 2012, in 2004, in 2000 all remind us. Lost in a Gallup captures in lively and unprecedented fashion the stories of polling flops, epic upsets, unforeseen landslides, and exit poll fiascoes in presidential elections since 1936. Polling’s checkered record in elections has rarely been considered in detail and, until now, has never been addressed collectively.

Polling embarrassments are not all alike. Pollsters have anticipated tight elections when landslides occurred; they have indicated the wrong winner in closer elections; state polls have confounded expected national outcomes. Exit polling has thrown Election Day into confusion. The work of venerable pollsters has been singularly and memorably in error. It is a rare presidential election not to be marred by polling controversies. Lost in a Gallup casts a critical eye on major figures in election polling such as George Gallup, a prickly founding father of public opinion research. The book also considers the polling innovations of Warren Mitofsky, whose admonition rings true across generations: “There’s a lot of room for humility in polling. Every time you get cocky, you lose.”

Lost in a Gallup examines how polling failure often equates to journalistic failure. Historically, poll-bashing was quite pronounced among prominent journalists, including well-known newspaper columnists such as Mike Royko in Chicago and Jimmy Breslin in New York. They and other journalists challenged the presumption that polls could accurately measure or interpret what the public was thinking. Even so, polls drive news media narratives about presidential elections, shaping conventional wisdom about how competitive those races are. As Lost in a Gallup makes clear, polls are not always in error. But when they fail, they can fail in surprising ways.

W. Joseph Campbell is an American writer, historian, media critic, and blogger who is the author of six other books, including the award-winning Getting It Wrong: Debunking the Greatest Myths in American Journalism.

"Campbell puts the glaring mistakes of the 2016 presidential polls in historical perspective in this accessible and well-informed survey of polling errors. . . . Newshounds closely following the latest 2020 predictions would be well-advised to read this bracing reality check."
— Publishers Weekly

"A fast-moving narrative history of some attempts to gauge public opinion amid electoral politics. . . . Campbell’s gaze goes far beyond the Beltway and back further in history than the astonishing election night four years ago."
— Wall Street Journal

"Campbell’s book is a tour de force on the history of presidential polling.”
— Civitas Institute

"Campbell shows how other errors have bedeviled the polling industry since 1936 despite decades of advances in computer power and statistical sophistication. It is difficult to read Campbell’s book without empathizing with the pollsters and (crucially, as Campbell observes) the journalists and pundits interpreting and amplifying their conclusions."
— Milken Institute Review

"A lively account of the personalities and squabbles, the greatest hits and equally great misses, that marked polling’s U.S. ascent. . . . Campbell provides a brisk historical tour of technical breakthroughs like probability sampling and new instruments such as the exit poll. It is not exactly a tale of progress."
— Reviews in American History

"Campbell’s book is well-written, impressively researched, and detailed. . . . Lost in a Gallup comes alive as Campbell relays the internal critiques, jealousies, evaluations, and self-assessments of the pollsters."
— Journalism History

"Campbell’s journalistic style is engaging, and he covers a tremendous amount of ground. . . . [he] raises important and timely questions about both polling and journalism performance."
— Public Opinion Quarterly

"This extensively researched and engagingly written volume profiles early pioneers of polling…highlighting their contributions, missteps, and non infrequent competitiveness and hubris."
— The Journal of American History