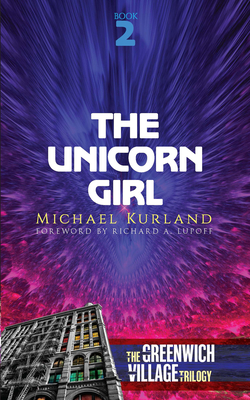 By Michael Kurland, Richard a. Lupoff (Foreword by)
$9.95
On Our Shelves Now
(This book cannot be returned. It may be a print-on-demand title, or for some other reason)

"Settle in for a trip to a wonderful half-real, half-imaginary era." -- Richard A. Lupoff Mike and Chester, the alien-fighting hippies of The Butterfly Kid, have found their way from New York City to San Francisco -- but that's just the first step of their odyssey. When Mike meets the girl of his dreams, he and Chester join her and her circus friends on a quest in search of a lost unicorn. Psychedelic hilarity ensues as they travel through time to encounter Victorian nudists, fire-breathing dragonettes, and live dinosaurs.
Touted as a "brain-blowing science-fiction freak out" upon its 1969 publication, The Unicorn Girl is the second book in the Greenwich Village Trilogy, a shared-world scenario written by three different authors, all of whom appear in the books as characters. Dover Publications returns this cosmic adventure to print for the first time in nearly 40 years, along with its predecessor, The Butterfly Kid, and its sequel, The Probability Pad. This edition features an appreciative new Foreword by science-fiction author Richard A. Lupoff.

Michael Kurland is the author of several science-fiction books as well as a detective series based on characters from the Sherlock Holmes mysteries. His nonfiction works include The Spymaster's Handbook and How to Solve a Murder: The Forensic Handbook.