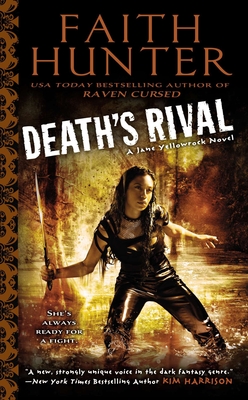 By Faith Hunter
$7.99
UNAVAILABLE-Possible Reasons: Backordered, Out-of-Stock, or Out-of-Print (But email us to search for a copy.)

This is book number 5 in the Jane Yellowrock series.

For a vampire killer like Jane, having Leo Pellisier as a boss took some getting used to. But now, someone is out to take his place as Master Vampire of the city of New Orleans, and is not afraid to go through Jane to do it. After an attack that’s tantamount to a war declaration, Leo knows his rival is both powerful and vicious, but Leo’s not about to run scared. After all, he has Jane. But then, a plague strikes, one that takes down vampires and makes their masters easy prey.

Now, to uncover the identity of the vamp who wants Leo’s territory, and to find the cause of the vamp-plague, Jane will have to go to extremes…and maybe even to war.

A native of Louisiana, Faith Hunter spent her early years on the bayous and rivers, learning survival skills and the womanly arts. She liked horses, dogs, fishing and crabbing much better than girly skills. She still does.

In grade school, she fell in love with fantasy and science fiction, reading five books a week and wishing she could "write that great stuff." Faith now shares her life with her Renaissance Man and their dogs in a Enclave of their own.

Praise for the novels of Faith Hunter:

“A thrill ride from start to finish…Hunter has an amazing talent for capturing mood.”—SF Site