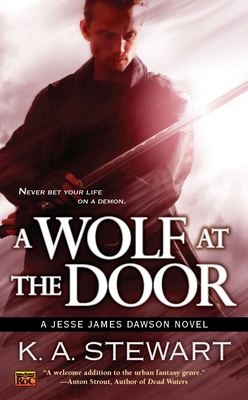 By K. A. Stewart
UNAVAILABLE AT THIS TIME (Possible reasons: Backordered, Out-of-Stock Indefinitely, or Print-on-Demand only)
OUT OF PRINT

This is book number 3 in the Jesse Dawson series.

Bookseller: Alec
Title: A Wolf at the Door

Comments:
In this third volume featuring the Kansas City samurai, Jesse Dawson takes on more demons, fleshless men, and the agents of LA when he receives a tip that the life of a superstar holds the key to a power that could shift the balance in a secret demon war.

Jesse James Dawson was once an ordinary man until he discovered that demons were real, and fighting them meant putting his own soul on the line. His new case is a beauty: Gretchen Keene, a Hollywood starlet who’s become an unwitting catalyst in an all-out demon war. It’s not her soul Jesse needs to protect, but the two-hundred-and-seventy-six others she’s carting around—all the souls sold to spend just one night with the blonde bombshell. That’s a lot of baggage, although it might explain her meteoric rise to fame. And it’s all up for grabs by the demon world.

All Jesse has to do is keep her safe until New Year's. Sounds easy. But darkness is casting a nasty shadow in the California sun—a new unseen enemy is closing in and leaving Jesse to wonder: how do you fight something you can’t see coming?

K. A. Stewart is the author of the Jesse James Dawson urban fantasy series. She has a BA in English with an emphasis in literature from William Jewell College. She lives in Missouri with her husband, daughter, one cat, and one small furry demon that thinks it’s a cat.