The Blackstone Chronicles: The Serial Thriller Complete in One Volume (Paperback) 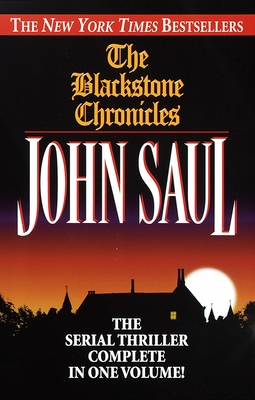 Now, for the first time, the New York Times bestselling serial thriller is complete in one terrifying volume. John Saul, the master of supernatural suspense, John Saul, brings to chilling life the small New England town of Blackstone--and the secrets and sins that lay buried there. . . .

From atop Blackstone's highest hill, the old Asylum casts its shadow over the village. Built in the 1890s to house the insane, the Asylum has stood vacant for decades. But now, the wrecker's ball is about to strike--and unleash an ominous evil. Strange gifts begin to appear on the doorsteps of Blackstone's finest citizens.

Each bears a mysterious history.

Each brings a horrifying power to harm.

Each reveals another thread in the suspensefully woven web of . . .

Part I--An Eye for an Eye: The Doll
Part II--Twist of Fate: The Locket
Part III--Ashes to Ashes: The Dragon's Flame
Part IV--In the Shadow of Evil: The Handkerchief
Part V--Day of Reckoning: The Stereoscope
Part VI--Asylum

John Saul’s first novel, Suffer the Children, was an immediate million-copy bestseller. His other bestselling suspense novels include Perfect Nightmare, Black Creek Crossing, and The Presence. He is also the author of the New York Times bestselling serial thriller The Blackstone Chronicles, initially published in six installments but now available in one complete volume. Saul divides his time between Seattle and Hawaii.