Asking for the Moon (Dalziel and Pascoe #16) (Mass Market) 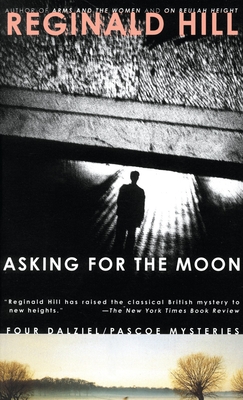 By Reginald Hill
$7.99
UNAVAILABLE-Possible Reasons: Backordered, Out-of-Stock, or Out-of-Print (But email us to search for a copy.)

This is book number 16 in the Dalziel and Pascoe series.

Spanning the careers of two of crime fiction's most esteemed police detectives, these four short mysteries are revelatory episodes in the complex relationship between Dalziel and Pascoe.  In the opening tale, the chilling start of the Dalziel and Pascoe partnership--never before revealed--is cemented by a killer and his shotgun.  In another, the duo investigates the fate of a woman no one has seen for a year, except her brother, who claims he is being haunted by her ghost.  Then the detectives keep vigil at an isolated farmhouse, waiting to see what is making things go bump in the night.  Finally, a jump in time to the year 2012, and the partners' last case: the first man murdered on the moon.  Set against Yorkshire's brooding landscape, Asking for the Moon shows the full spectrum of Dalziel's eccentric brilliance, the evolution of Pascoe's professionalism, the zenith of Reginald Hill's incomparable talent...and the very best British mystery can be.

Reginald Hill has been widely published both in England and in the United States and has been justly compared with P.D. James and Ruth Rendell.  He received Britain's most coveted mystery writers' award, the Cartier Diamond Dagger Award, as well as the Golden Dagger Award for his Dalziel/Pascoe series.  Reginald Hill writes thrillers under the name Patrick Ruell.  He lives with his wife in Cumbria, England.