Army of None: Autonomous Weapons and the Future of War (Hardcover) 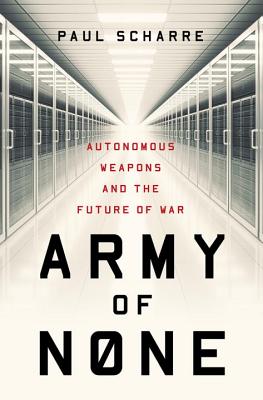 By Paul Scharre
UNAVAILABLE AT THIS TIME (Possible reasons: Backordered, Out-of-Stock Indefinitely, or Print-on-Demand only)
OUT OF PRINT

A Pentagon defense expert and former U.S. Army Ranger explores what it would mean to give machines authority over the ultimate decision of life or death.

What happens when a Predator drone has as much autonomy as a Google car? Or when a weapon that can hunt its own targets is hacked? Although it sounds like science fiction, the technology already exists to create weapons that can attack targets without human input. Paul Scharre, a leading expert in emerging weapons technologies, draws on deep research and firsthand experience to explore how these next-generation weapons are changing warfare.

Scharre’s far-ranging investigation examines the emergence of autonomous weapons, the movement to ban them, and the legal and ethical issues surrounding their use. He spotlights artificial intelligence in military technology, spanning decades of innovation from German noise-seeking Wren torpedoes in World War II—antecedents of today’s homing missiles—to autonomous cyber weapons, submarine-hunting robot ships, and robot tank armies. Through interviews with defense experts, ethicists, psychologists, and activists, Scharre surveys what challenges might face "centaur warfighters" on future battlefields, which will combine human and machine cognition. We’ve made tremendous technological progress in the past few decades, but we have also glimpsed the terrifying mishaps that can result from complex automated systems—such as when advanced F-22 fighter jets experienced a computer meltdown the first time they flew over the International Date Line.

At least thirty countries already have defensive autonomous weapons that operate under human supervision. Around the globe, militaries are racing to build robotic weapons with increasing autonomy. The ethical questions within this book grow more pressing each day. To what extent should such technologies be advanced? And if responsible democracies ban them, would that stop rogue regimes from taking advantage? At the forefront of a game-changing debate, Army of None engages military history, global policy, and cutting-edge science to argue that we must embrace technology where it can make war more precise and humane, but without surrendering human judgment. When the choice is life or death, there is no replacement for the human heart.

A former U.S. Army Ranger who served in Iraq and Afghanistan, Paul Scharre is the director of the Technology and National Security Program at the Center for a New American Security. He has written for the Wall Street Journal, the New York Times, Time, Foreign Affairs, and Politico, and he appears frequently on CNN, FOX News, NPR, MSNBC, and the BBC. He lives in Virginia.

[E]ngagingly detailed…Scharre offers an authoritative and sobering perspective on the automated battlefields that will very soon come to characterize military conflict.
— Science

A tour de force of the future of war technology. A former U.S. Army Ranger turned defense analyst, Paul Scharre has been there and back. He skillfully uses that background to blend personal experience and thoughtful analysis into a highly readable journey through the world of robots on the battlefield and beyond.
— P.W. Singer, author of Wired for War and Ghost Fleet

The era of autonomous weapons is upon us. In Army of None, Scharre combines his experience as a warrior and his insight as a policy researcher to paint a comprehensive picture of exactly what such an era will look like. He masterfully weaves together threads tying future weapon systems, artificial intelligence, and policy imperatives to deliver a book that is simply a must-read for anyone interested in military technology and its broader implications.

— Amir Husain, founder and CEO of SparkCognition, and author of The Sentient Machine

Technology democratizes. What was once the exclusive purview of nation-states quickly becomes accessible by everyone. Army of None serves as a smart primer to what’s to come in warfare, but also what we’re going to have to contend with in our daily lives soon after.

— Bruce Schneier, author of Data and Goliath: The Hidden Battles to Collect Your Data and Control Your World

Be very, very afraid. As this extraordinary book reveals, we are fast sailing into an era in which big life-and-death decisions in war will be made not by men and women, but by artificial intelligence. Are we prepared for the most fundamental shift in warfare in history? This illuminating book will dominate the discussion and analysis of this problem—and its execution in the field—for decades to come.
— Admiral James Stavridis, former Supreme Allied Commander at NATO and author of Sea Power: The History and Politics of the World’s Oceans

A clear, well-written, and richly documented discussion of an issue that deserves deep and careful study.
— Kirkus Reviews (starred review)

[D]etailed, nuanced, open-minded look at an incredibly complex and technical subject…Army of None will spark important discussions as it empowers reader with knowledge about a subject with enormous implications.