The Air We Breathe: A Novel (Paperback) 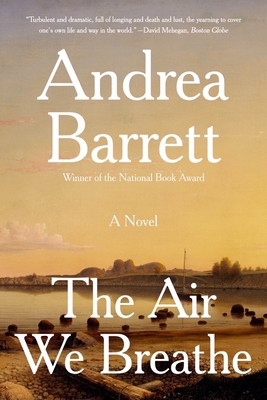 By Andrea Barrett
UNAVAILABLE AT THIS TIME (Possible reasons: Backordered, Out-of-Stock Indefinitely, or Print-on-Demand only)
Backordered

"An evocative panorama of America…on the cusp of enormous change" (Newsday) by the National Book Award-winning author of Ship Fever.

In the fall of 1916, America prepares for war—but in the isolated community of Tamarack Lake, the focus is on the sick. Wealthy tubercular patients live in private cure cottages; charity patients, mainly immigrants, fill the large public sanatorium. Prisoners of routine, they take solace in gossip, rumor, and—sometimes—secret attachments. But when the well-meaning efforts of one enterprising patient lead instead to a tragic accident and a terrible betrayal, the war comes home, bringing with it a surge of anti-immigrant prejudice and vigilante sentiment.

Andrea Barrett masterfully sets this luminous novel in a historical period of great progress in science and medicine—even in the art of war. Her richly complex men and women, with their passions and vulnerabilities, engage and haunt us.

Andrea Barrett is the author of The Air We Breathe, Servants of the Map (finalist for the Pulitzer Prize), The Voyage of the Narwhal, Ship Fever (winner of the National Book Award), and other books. She teaches at Williams College and lives in northwestern Massachusetts.

Barrett eloquently blends scientific elements like TB and chemistry with her diverse characters’ hopes and heartbreaks to bring the book to crackling life.
— Entertainment Weekly

[Barrett’s] gift for story, for mining America’s past, and her ability to construct a specific moment in the quest for knowledge are remarkable.
— Philadelphia Inquirer

Barrett’s writing has a quality of reflective mildness, a restraint which some might call quiet…There is an elegance of tone, but an enormous amount happens. The Air We Breathe is turbulent and dramatic, full of longing and death and lust, the yearning to cover one’s own life and way in the world.

[The Air We Breathe] is a deft and quietly wrenching tale of human misunderstanding.

Details of New York tenements and of the sanitarium’s regime are vivid and engrossing.
— Publishers Weekly

[A] potent, engrossing portrayal of life at a turn-of-the-century sanatorium…[Barrett has] an unusual—and utterly haunting—narrative voice.
— Kirkus Reviews (starred review)

Barrett’s powers of historical evocation, especially her knowledge of the scientific preoccupations of the time, are impressive.
— The New Yorker

Here [in The Air We Breathe], as in several of her other works of fiction, including the National Book Award–winning Ship Fever, Barrett enriches her story with science…In fact, her style, always stylish and exact, is at its most compelling when she’s describing her characters’ engagement in their scientific studies.