A Royal Passion: The Turbulent Marriage of King Charles I of England and Henrietta Maria of France (Hardcover) 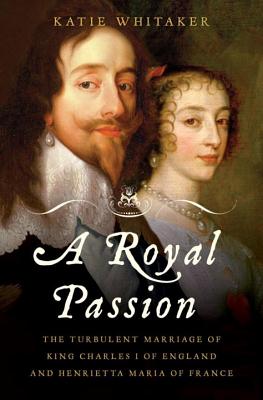 A royal marriage, based on romantic passion and ferocious, unbridgeable religious differences, ends in tragedy—a history worthy of Shakespeare.

It was, from the start, a dangerous experiment. Charles I of England was a Protestant, the fifteen-year-old French princess a Catholic. The marriage was arranged for political purposes, and it seemed a mismatch of personalities. But against the odds, the reserved king and his naively vivacious bride fell passionately in love, and for ten years England enjoyed an era of peace and prosperity.

When Charles became involved in war with Puritan Scotland, popular hatred of Henrietta’s Catholicism roused Parliament to fury. As the opposition party embraced new values of liberty and republicanism—the blueprint for the American War of Independence and the French Revolution—Charles’s fears for his wife’s safety drove him into a civil war that would cost him his crown and his head.

Katie Whitaker is the author of Mad Madge, winner of the Elizabeth Longford Prize for Historical Biography. She lives in North Yorkshire, England, with her husband and two children.