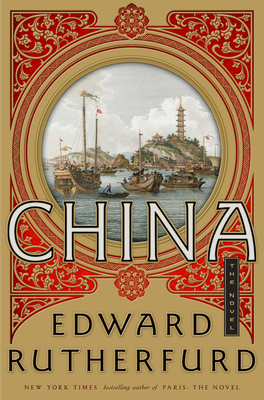 The internationally bestselling author of Paris and New York takes on an exhilarating new world with his trademark epic style in China: The Novel

Edward Rutherfurd has enthralled millions of readers with his grand, sweeping historical sagas that tell the history of a famous place over multiple generations. Now, in China: The Novel, Rutherfurd takes readers into the rich and fascinating milieu of the Middle Kingdom.

The story begins in 1839, at the dawn of the First Opium War, and follows Chinese history through Mao's Cultural Revolution and up to the present day. Rutherfurd chronicles the rising and falling fortunes of members of Chinese, British, and American families, as they negotiate the tides of history. Along the way, in his signature style, Rutherfurd provides a deeply researched portrait of Chinese history and society, its ancient traditions and great upheavals, and China's emergence as a rising global power. As always, we are treated to romance and adventure, heroines and scoundrels, grinding struggle and incredible fortunes.

China: The Novel brings to life the rich terrain of this vast and constantly evolving country. From Shanghai to Nanking to the Great Wall, Rutherfurd chronicles the turbulent rise and fall of empires as the colonial West meets the opulent and complex East in a dramatic struggle between cultures and people.

Extraordinarily researched and majestically told, Edward Rutherfurd paints a thrilling portrait of one of the most singular and remarkable countries in the world.

EDWARD RUTHERFURD is the internationally bestselling author of eight novels, including the New York Times bestsellers Paris, New York, London, The Princes of Ireland, and The Rebels of Ireland.

"Bravo; this is a big, complex, and utterly involving portrait of 19th-century China."
Antonia Senior, The Times (London)

"It’s a bravura performance, fizzing with incident, excitement and energy."
The Daily Mail

“Edward Rutherfurd is known for massive historical novels usually set in cities like New York, Paris and London. They dig deeply into a specific place and he focuses on a certain period…
Rutherfurd’s thorough research shows again here in his descriptions of China and other places in Asia like Hong Kong and Macao….Besides place, Rutherfurd also has thoroughly researched the many complexities of Chinese culture…. CHINA can perhaps be placed in the same basket as the James Clavell novels of Tai-Pan and Noble House…Worth sticking with all 760 pages”
Asian Review of Books