Biohazard: The Chilling True Story of the Largest Covert Biological Weapons Program in the World--Told from the Inside by the Man Who Ran It (Paperback) 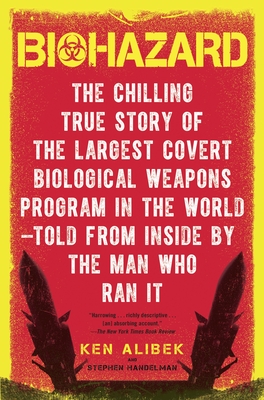 By Ken Alibek, Stephen Handelman
$18.00
UNAVAILABLE-Possible Reasons: Backordered, Out-of-Stock, or Out-of-Print (But email us to search for a copy.)

“Read and be amazed. . . . An important and fascinating look into a terrifying world of which we were blissfully unaware.”—Robin Cook, author of Contagion

Anthrax. Smallpox. Incurable and horrifying Ebola-related fevers. For two decades, while a fearful world prepared for nuclear winter, an elite team of Russian bioweaponeers began to till a new killing field: a bleak tract sown with powerful seeds of mass destruction—by doctors who had committed themselves to creating a biological Armageddon. Biohazard is the never-before-told story of Russia’s darkest, deadliest, and most closely guarded Cold War secret.

No one knows more about Russia’s astounding experiments with biowarfare than Ken Alibek. Now the mastermind behind Russia’s germ warfare effort reveals two decades of shocking breakthroughs . . . how Moscow’s leading scientists actually reengineered hazardous microbes to make them even more virulent . . . the secrets behind the discovery of an invisible, untraceable new class of biological agents just right for use in political assassinations . . . the startling story behind Russia’s attempt to turn a sample of the AIDS virus into the ultimate bioweapon. And in a chilling work of real-world intrigue, Biohazard offers us all a rare glimpse into a shadowy scientific underworld where doctors manufacture mass destruction, where witnesses to errors are silenced forever, and where ground zero is closer than we ever dared believe.

Ken Alibek was born in Kauchuk, Kazakhstan, in 1950. He graduated in 1975 from the military faculty of the Tomsk Medical Institute, where he majored in infectious diseases and epidemiology. He holds a Ph.D. in microbiology for research and development of plague and tularemia biological weapons and a doctorate of science in biotechnology for developing the technology to manufacture anthrax on an industrial scale. He joined Biopreparat in 1975 and was its first deputy chief from 1988 to 1992. Since his defection to the United States in 1992, he has briefed U.S. military intelligence on biological weapons. He is now working in biodefense.

Stephen Handelman is a columnist at Time. He was the Moscow bureau chief of The Toronto Star in the late eighties and early nineties and is the author of Comrade Criminal: Russia’s New Mafiya.

“An important and fascinating look into a terrifying world of which we were blissfully unaware. While we all grew up with the anxiety of the threat of a nuclear winter, little did we know there was an equally horrific menace from biotechnology. Biohazard takes you behind the scenes of the Soviet Union’s clandestine bioweapons program. Read and be amazed.”—Robin Cook, author of Contagion

“As the top scientist in the Soviet biowarfare program and the inventor of the world’s most powerful anthrax, Ken Alibek has stunned the highest levels of the U.S. government with his revelations. Now, in a calm, compelling, utterly convincing voice, he tells the world what he knows. Modern biology is producing weapons that in killing power may exceed the hydrogen bomb. Ken Alibek describes them with the intimate knowledge of a top weaponeer.”—Richard Preston, author of The Hot Zone

“This is a gripping book. The hum of machines that kept deadly airborne germs away from the scientists and their families can be heard in the background. The technical details are vivid and terrible even as the human story unfolds. It was fascinating—and chilling—to peer inside this awesome war machine. I worked for a dozen years to develop defenses against a Soviet threat that was largely unknown. To see its full scope made me realize how overpowered we would have been if it had ever been used. Military casualties would have been incredible, but civilians would have suffered equally as contagious diseases raced through cities and towns. Some of the Soviet ‘advances,’ such as inducing antibiotic resistance in classical pathogens like plague, would have changed the practice of medicine forever.”—C. J. Peters, author of Virus Hunter, former deputy commander of USAMRIID, now at the CDC