Worth Repeating: A Literary Resurrection (Paperback) 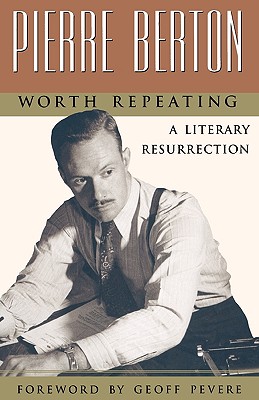 This glorious miscellany of many of Pierre Berton's most sparkling pieces brings back lost treasures from his years as a journalist covering Canada and the world. Worth Repeating is a treat to read, but it's also a valuable reminder of Berton's fifty years of extraordinary contributions to reporting and social commentary.

Writing, as Berton acknowledges in a lively introduction, has been an obsession for him. Wonderful vignettes, book excerpts, essays, sketches and satires — some out of print for decades — take us back into the days when television had not yet arrived and the Eaton's catalogue was eagerly awaited. From portraits of Canadian eccentrics and British royalty to sharp, crusading reflections on Canadian society, on religion and on the media, Worth Repeating is Berton at his best — accessible, funny, polemical and wise.

"This is more than an anthology.  It is a resurrection.  The various pieces that follow — essays, articles, bits of history, chapters from out-of-print books, the occasional verse, a stage sketch or two — were written over a period of fifty years.  All have long since been interred in the graveyard of dead manuscripts; gone, yes — but hopefully not forgotten, at least by me."

Pierre Berton was one of Canada’s most popular and prolific authors. From narrative histories and popular culture, to picture and coffee table books to anthologies, to stories for children to readable, historical works for youth, many of his fifty books are now Canadian classics.

Born in 1920 and raised in the Yukon, Pierre Berton worked in Klondike mining camps during his university years. He spent four years in the army, rising from private to captain/instructor at the Royal Military College in Kingston. He spent his early newspaper career in Vancouver, where at 21 he was the youngest city editor on any Canadian daily. He wrote columns for and was editor of Maclean’s magazine, appeared on CBC’s public affairs program “Close-Up” and was a permanent fixture on “Front Page Challenge” for 39 years. He was a columnist and editor for the Toronto Star and was a writer and host of a series of CBC programs.

Pierre Berton received over 30 literary awards including the Governor-General’s Award for Creative Non-Fiction (three times), the Stephen Leacock Medal of Humour, and the Gabrielle Leger National Heritage Award. He received two Nellies for his work in broadcasting, two National Newspaper awards, and the National History Society’s first award for “distinguished achievement in popularizing Canadian history.” For his immense contribution to Canadian literature and history, he was awarded more than a dozen honourary degrees, is a member of the Newsman’s Hall of Fame, and is a Companion of the Order of Canada.

Pierre Berton passed away in Toronto on November 30, 2004.

"No one has written of Canadian history and culture with greater verve and popular appeal."
—The Globe and Mail