The Novel of the Century: The Extraordinary Adventure of Les Misérables (Hardcover) 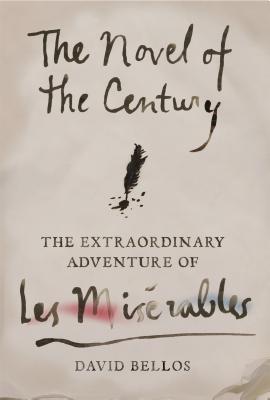 By David Bellos
$27.00
UNAVAILABLE-Possible Reasons: Backordered, Out-of-Stock, or Out-of-Print (But email us to search for a copy.)

Les Misérables is among the most popular and enduring novels ever written. Like Inspector Javert’s dogged pursuit of Jean Valjean, its appeal has never waned, but only grown broader in its one-hundred-and-fifty-year life. Whether we encounter Victor Hugo’s story on the page, onstage, or on-screen, Les Misérables continues to captivate while also, perhaps unexpectedly, speaking to contemporary concerns. In The Novel of the Century, the acclaimed scholar and translator David Bellos tells us why.

This enchanting biography of a classic of world literature is written for “Les Mis” fanatics and novices alike. Casting decades of scholarship into accessible narrative form, Bellos brings to life the extraordinary story of how Victor Hugo managed to write his novel of the downtrodden despite a revolution, a coup d’état, and political exile; how he pulled off a pathbreaking deal to get it published; and how his approach to the “social question” would define his era’s moral imagination. More than an ode to Hugo’s masterpiece, The Novel of the Century also shows that what Les Misérables has to say about poverty, history, and revolution is full of meaning today.

David Bellos is the director of the Program in Translation and Intercultural Communication at Princeton University, where he is also a professor of French and comparative literature. He has won many awards for his translations of Georges Perec, Ismail Kadare, and others, including the Man Booker International Translator’s Award. He also received the Prix Goncourt for George Perec: A Life in Words. He is the author of the book Is That a Fish in Your Ear? Translation and the Meaning of Everything.

One of the Most Anticipated Books of Spring 2017, Publishers Weekly
One of the Best Reviewed Books of 2017 (So Far), Literary Hub

"Genuinely fresh and inspiring . . . Bellos’s book is a major accomplishment. His warm and engaging study of Victor Hugo’s 1862 masterpiece renews faith in the idea, so fundamental to the mysterious attraction of literature, that great books of whatever age continue to be worthwhile objects of attention. In applying a melange of literary criticism, linguistics, political science and history to the study of one of the best-known, if least-understood great books of all time, he illuminates the work in a way that transcends conventional literary criticism." —Michael Lindgren, The Washington Post

"Whether you're contemplating a run at Les Misérables or returning to it, Bellos' book is a perfect guide—
as well as a compelling story in its own right . . . [It] becomes surprisingly suspenseful as Bellos takes us through the months leading up to the novel's publication . . . Bellos has struck the ideal balance of top-notch research and readable prose in the chapters that deftly lead us through the world of the novel and its characters . . . An engaging and enlightening companion." —Liza Graham, NPR

"Bellos's fine book could be seen as part of the recent critical genre that Joyce Carol Oates baptized the 'bibliomemoir' . . . But it is not so much about Bellos's personal engagement with the novel as a study of its genesis, its production, its reception, and notably its language . . . The story of the composition of the novel, and of the journey of manuscript, proofs, then corrected proofs between Guernsey and Brussels, is one of the most entertaining and illuminating in Bellos's book . . . " —Peter Brooks, The New York Review of Books

"This unique and readable book conveys the chaotic fabric of French life two centuries ago more powerfully than most conventional histories." —Foreign Affairs

"If you’re a Les Misérables superfan (yes, we’re looking at you) then we have three words for you: Read. This. Book." —Elizabeth Rowe, Bookish

"Bellos takes us on a freewheeling ride through the genesis, revision, publication and eternal life of Les Misérables, with relevant vignettes from Victor Hugo's life and deep dives into historical and linguistic aspects of the novel . . . Bellos has indeed written 'the definitive biography of the world's most popular novel' . . . If you love Hugo's novel and/or Boublil and Schönberg's musical 'Les Mis,' read The Novel of the Century." —
Marva Barnett, The Huffington Post

"Captivating . . . The Novel of the Century perfectly captures all sides of this publishing phenomenon and the man at its center. Bellos fascinates from beginning to end." —Steve Donoghue, The Christian Science Monitor

"Never mind those self-help manuals urging that some classic novel may change your life: in this sparkling study of the birth, growth and afterlife of Hugo's evergreen blockbuster, The Novel of the Century, David Bellos argues that Les Misérables already has . . . With deep learning but a charmingly light touch, Belles dissects and salutes this 'dramatic page-turner' bursting with 'generous moral principles.'" —Boyd Tonkin, The Economist

"In telling the engrossing story of the book and its author’s journey from staunch defender of the government to exile in Guernsey after Napoleon III’s 1851 coup d’état, Bellos . . . makes a powerful case for the novel’s enduring relevance." —Lucy Watson, Financial Times

"This biography of one of the world’s most read novels is rich in extraordinary detail . . . Bellos traces the life of the 1,500-page novel from conception to publication, mentioning along the way the many film and musical adaptations of Les Misérables that have given it a rich life beyond the printed page." —Ruth Scurr, The Guardian

"The origin story of Victor Hugo's masterpiece Les Miserables is an epic tale, and Bellos is the perfect writer to tell it . . . This book is a joy to read, and Bellos makes a convincing case for his claim that 'among all the gifts France has given to Hollywood, Broadway and the common reader wherever she may be, Les Miserables stands out as the greatest by far.'" —The National Book Review

"There’s no question about it: David Bellos makes the case for the fame of Victor Hugo's Les Misérables (1862). It's the novel of the century and possibly then some . . . [A] superb biography of a novel rather than a man." —Charles R. Larson, CounterPunch

"The Novel of the Century . . . vividly traces the origin and development of Hugo's most famous work, assessing its impact on the novel as a genre." —Henrik Bering, Los Angeles Review of Books

"Bellos’ feat is worthy of admiration . . . whether you’re a serious Francophile or just crave a good read peppered with cocktail party-ready factoids . . . Bellos has impeccable academic credentials, but he never talks down to the reader. From manuscript to musical, The Novel of the Century delivers on its promise." —
Keith Herrell, BookPage

"Bellos's near-unmitigated zeal is convincing, and itself part of the pleasure of the book; and he’s a knowledgeable, attentive reader, and an engaging storyteller himself, alert to vivid detail . . . Any reader who hasn't yet embarked on Hugo's book might be converted to the idea by this one." —Daniel Hahn, The Spectator

"[Bellos is] equipped to tackle le Léviathan of French literature . . . The Novel of the Century, for example, reveals a great deal about French coinage and the intricacies of Victorian authorial contracts. (If this sounds boring, it isn't.) . . . That section [on cloth-dying] alone is worth the price of admission . . . Until Hugo returns from the grave or Les Mis renders up its secrets in the fullness of time, Bellos' fine volume will do." —Jason Rhode, Paste

"[Bellos is] a crisp stylist capable of seizing the readers' attention and holding it effortlessly . . . Anyone who loves Hugo, France, and the French language will revel in this delightful book that explains all the intimacies of 19th-century French life." —Kirkus Reviews (starred review)

"As Bellos, a translator of French literature, proves here, the story of how Victor Hugo’s classic novel came to life is a challenging, complex, and utterly engrossing epic all its own . . . There are tidbits of trivia sprinkled effervescently throughout (Bellos notes that reluctant readers may read just one chapter a day—the novel contains 365), along with serious considerations of Hugo’s relationship to the French language, his moral universe, and his political intentions for a book that spawned countless spin-offs." —Publishers Weekly (starred review)

"[Bellos's] book elevates this great novel to its rightful place in the literary cannon . . . This delightful narrative about a literary masterpiece will be particularly intriguing to readers of French literature and those individuals curious about the true origins of 'Les Mis.'" —Erica Swenson Danowitz, Library Journal

“David Bellos, whose distinguished career has been dedicated to propagating appreciation of French fiction in the resistant Anglophone world, makes a grand claim for Les Misérables. It is, against (to take other champions) Tolstoy, Dickens, and Melville, the novel of the nineteenth century. He follows its course from first stirrings to most recent adaptation. He proves his case.” —John Sutherland, author of Lives of the Novelists and Orwell’s Nose

“The Novel of the Century is the best, most instructive book about Les Misérables ever written—the shrewdest, the most knowledgeable, the most detailed, the most enthusiastic, and the most enjoyable.” —Paul Berman, author of A Tale of Two Utopias and Power and the Idealists

“It is possible for a book to have adventures as well as recount them. David Bellos’s witty, informed, but never overloaded work proves the case thoroughly. Here we learn a great deal about the career of a writer, the turbulent politics of his times, the composition of a great novel, and the life and afterlife of the novel itself. And whether the subject is exile, poverty, suffrage, Hugo’s ‘split mind’ during the 1848 Revolution, or the complications of the word ‘miserable’ in English and French, the sense of adventure never lapses. The recurring, multifaceted question posed by Les Misérables, as Bellos says, is not whether good will triumph over evil, but ‘how hard it is to be good.’” —Michael Wood, author of Yeats and Violence and Alfred Hitchcock: The Man Who Knew Too Much

“In this lively and engaging account of the making of Les Misérables, David Bellos captures the brilliance not only of Victor Hugo’s novel but also of its conception, execution, and publication. His learned study bristles with insights on topics great and small—from French history, politics, and linguistic registers to the meaning of colors, coinage, dates, and modes of transport in the book to its untranslatable title and its many adaptations worldwide. The story behind the greatest novel of the nineteenth century will enchant both popular and scholarly readers, who will come away with an even deeper understanding of and appreciation for Hugo’s prose masterwork.” —Kathryn Grossman, Pennsylvania State University

“In full command of the artistic and moral complexities of Victor Hugo’s masterpiece, as well as of the social and political conditions in nineteenth-century France, David Bellos offers the reader a comprehensive view of Hugo’s creative genius and of the historical circumstances of the great novel’s composition. He does so with brio and humor, and in a distinctly personal voice.” —Victor Brombert, author of Victor Hugo and the Visionary Novel