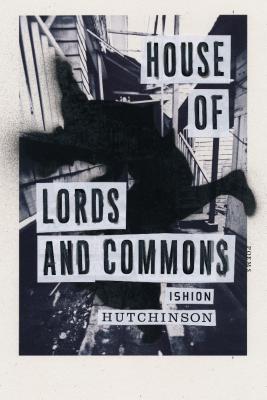 By Ishion Hutchinson
UNAVAILABLE AT THIS TIME (Possible reasons: Backordered, Out-of-Stock Indefinitely, or Print-on-Demand only)
OUT OF PRINT

A stunning collection that traverses the borders of culture and time, from the 2011 winner of the PEN/Joyce Osterweil Award

In House of Lords and Commons, the revelatory and vital new collection of poems from the winner of the 2013 Whiting Writers’ Award in poetry, Ishion Hutchinson returns to the difficult beauty of the Jamaican landscape with remarkable lyric precision. Here, the poet holds his world in full focus but at an astonishing angle: from the violence of the seventeenth-century English Civil War as refracted through a mythic sea wanderer, right down to the dark interior of love.

These poems arrange the contemporary continuum of home and abroad into a wonderment of cracked narrative sequences and tumultuous personae. With ears tuned to the vernacular, the collection vividly binds us to what is terrifying about happiness, loss, and the lure of the sea. House of Lords and Commons testifies to the particular courage it takes to wade unsettled, uncertain, and unfettered in the wake of our shared human experience.

Ishion Hutchinson was born in Port Antonio, Jamaica. His poetry collection Far District (2010) won the PEN/Joyce Osterweil Award, and House of Lords and Commons (2016) won the National Book Critics Circle Award in Poetry. Other honors include a Whiting Writers’ Award, the Glenna Luschei Award from Prairie Schooner journal, and the Academy of American Poets’ Larry Levis Prize. He is an assistant professor of English at Cornell University.

WINNER OF THE NATIONAL BOOK CRITICS CIRCLE AWARD IN POETRY

"Hutchinson’s lines listen to themselves, finding the next phrase, and then the next, implicit in what’s already been written down. His sound effects are exquisite: the clusters of consonants . . . and the vowels so open you could fall into them, the magisterial cresting syntax, the brilliant coupling of unlike words . . . [A] very promising book." —Dan Chiasson, New Yorker

“What nerve and music his poems possess, how beautifully they chart the poet’s search. House of Lords and Commons begins the mythology of a great voice.” —John Freeman

“To call Ishion Hutchinson a brilliant Caribbean poet is just as silly as pigeon-holing Eavan Boland an ‘Irish poet’ or Adonis a ‘poet from Syria.’ This is simply because Hutchinson comes to us from the country called music, he stuns the reader with the sheer symphony of his sentences.
I love his rage against politics (‘casting / beatitudes at the castor-oiled pimps / in Parliament; Pray for them, joyfully, / their amazing death!’) and the lyrics of childhood intimacies, of tenderness, fatherhood. To capture one of these tonalities would already have been a wonderful gift. But the fact of their abundant, generous, choral presence on these pages, tells us that we are in Hutchinson major talent. He is without a doubt one of the most gifted poets of my generation.” —Ilya Kaminsky

“Writing about the colonial legacy of violence on the paradisaical landscape of rural Jamaica, Ishion Hutchinson is a poet of great imaginative intensity. His sponsors are Hart Crane, George Seferis, and Derek Walcott, who, like him, are luxurious and stern at once. In these poems, hammered language has a jazzy, classical, rough, painterly beauty.” —Henri Cole

“A tensile strength runs through the vibrant abundance of Ishion Hutchinson’s work—it is the pure line of poetry, shaped by his sun-lit vision and music. Lords and Commons has been wrested from suffering and cruelty, irony and violence. And, in the end, it is an act of forgiveness.” —Susan Stewart