The Small Hand and Dolly (Paperback) 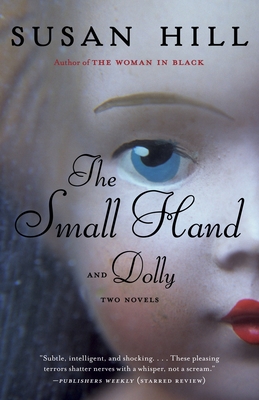 Antiquarian bookseller Adam Snow is returning from a client visit when he takes a wrong turn and stumbles upon a derelict Edwardian house with a lush, overgrown garden. As he approaches the door, he is startled to feel the unmistakable sensation of a small, cold hand creeping into his own, almost as though a child has taken hold of it. Shaken, he returns home to find himself plagued by nightmares. But when he decides to investigate the house’s mysteries, he is troubled by increasingly sinister visitations.

After being orphaned at a young age, Edward Cayley is sent to spend the summer with his forbidding Aunt Kestrel at Iyot house, her decaying estate on the damp, lonely fens in the west of England. With him is his spoiled, spiteful cousin Leonora. And when Leonora’s birthday wish for a beautiful doll is denied, she unleashes a furious rage which will haunt Edward through the years to come.

Susan Hill has been a professional writer for over fifty years. Her books have won the Whitbread, the John Llewellyn Prize, and the W. Somerset Maugham Award, and have been shortlisted for the Booker Prize. Her novels include Strange Meeting, I`m the King of the Castle and A Kind Man, and she has also published collections of short stories and two autobiographies. Her ghost story, The Woman in Black, has been running in London’s West End since 1988. Susan is married with two adult daughters and lives in North Norfolk.

"A compact, elegantly structured ghost story . . . happens to be one of Hill's specialties. . . . Like all good British ghost-story writers, Hill believes in meticulous structure and very rough justice. . . . Maybe it's the uneasy feeling, or maybe it's the simple pleasure of confident British storytelling craftsmanship, but something pulls you through The Small Hand with relentless urgency. This writer's grip is vicious."
—The New York Times Book Review

"Thanks to Hill’s deceptively simple plots and straightforward prose, you won’t even notice the noose she’s slipping around your throat."
—The Seattle Times

"A ghost-story duo that may remind many readers of [Stephen] King at his absolute best. . . . Turn on the lights, readers. These tales are the definition of bone chilling."
—Suspense Magazine