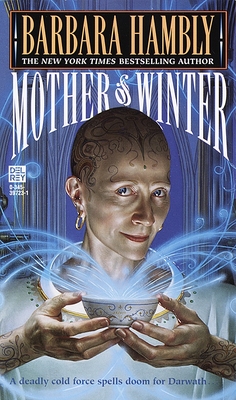 By Barbara Hambly
Email or call for price.
Out of Print

This is book number 4 in the Darwath series.

Five years after defeating the Dark Ones, the embattled inhabitants of the once-great Keep of Dare face a yet more deadly foe. An icy-cold force was spreading across the northlands, spawning strange creatures that killed everything in their grisly path . . .

Archmage Ingold Inglorion believed the source of this monstrous evil lay in the decadent lands to the south. With him traveled Gil Patterson, the scholar-warrior from Earth who had forsaken her own universe for love of the mage.  Determined to aid him in his quest, she was cursed to become the instrument of his death.

Ingold's apprentice Rudy Solis was left behind, the sole wizard standing between the Keep of Dare and the nightmare creatures besieging it. Rudy struggled tirelessly with wavering magic to ward off the virulent attacks of the ice mage's minions. But when someone attacked the widowed queen--the woman he loved--Rudy was forced to plumb the ultimate secret locked in the black crystal heart of the Keep of Dare . . . and so decide the fate of the world.

Barbara Hambly is the author of Patriot Hearts and The Emancipator’s Wife, a finalist for the Michael Shaara Award for Excellence in Civil War Fiction. She is also the author of Fever Season, a New York Times Notable Book of the Year, and the acclaimed historical Benjamin January series, including the novels A Free Man of Color and Sold Down the River. She lives in California.