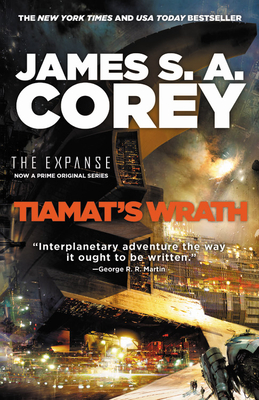 This is book number 8 in the The Expanse series.

The eighth book in the NYT bestselling Expanse series, Tiamat's Wrath finds the crew of the Rocinante fighting an underground war against a nearly invulnerable authoritarian empire, with James Holden a prisoner of the enemy. Now a Prime Original series.


Thirteen hundred gates have opened to solar systems around the galaxy. But as humanity builds its interstellar empire in the alien ruins, the mysteries and threats grow deeper.

In the dead systems where gates lead to stranger things than alien planets, Elvi Okoye begins a desperate search to discover the nature of a genocide that happened before the first human beings existed, and to find weapons to fight a war against forces at the edge of the imaginable. But the price of that knowledge may be higher than she can pay.

At the heart of the empire, Teresa Duarte prepares to take on the burden of her father's godlike ambition. The sociopathic scientist Paolo Cordozar and the Mephistophelian prisoner James Holden are only two of the dangers in a palace thick with intrigue, but Teresa has a mind of her own and secrets even her father the emperor doesn't guess.

And throughout the wide human empire, the scattered crew of the Rocinante fights a brave rear-guard action against Duarte's authoritarian regime. Memory of the old order falls away, and a future under Laconia's eternal rule -- and with it, a battle that humanity can only lose -- seems more and more certain. Because against the terrors that lie between worlds, courage and ambition will not be enough. . .

James S. A. Corey is the pen name of Daniel Abraham and Ty Franck. In addition to writing the novels and short stories of The Expanse, they wrote and produced the television series of the same name. Daniel lives with his family in the American southwest. Ty will tell you where he lives when and if he wants you to come over.

"Corey deftly weaves multiple points of view to create a dense and colorful tapestry of political intrigue, personal relationships, and sophisticated technology that bursts with action but also delivers an introspective view of the characters as they age and reflect on their purpose and the value of their lives."—Booklist (starred review)

"As Corey wraps up their epic space opera series, they're running on all cylinders, playing with epic consequences for humanity, and showing that none of their long-running characters are safe from what could come. But they also put together a story that seems all-too-relevant in this day and age: a warning of the dangers that fascism and totalitarianism bring."—Polygon

"A standout tale of violence, intrigue, ambition, and hope. ... Corey cranks up the tension relentlessly in this fast-paced story of heroes and rebels fighting for freedom. With enough thrills and intrigue for three Hollywood blockbusters, the novel stands alone nicely, making it easy for new readers as well as diehard series fans to dive right in."
—Publishers Weekly on Nemesis Games

"The science fictional equivalent of A Song of Ice and Fire...only with fewer beheadings and way more spaceships."
—NPR Books on Cibola Burn

"It's been too long since we've had a really kickass space opera. Leviathan Wakes is interplanetary adventure the way it ought to be written, the kind of SF that made me fall in love with the genre way back when, seasoned with a dollop of horror and a dash of noir. Jimmy Corey writes with the energy of a brash newcomer and the polish of a seasoned pro. So where's the second book?"
—George R. R. Martin on Leviathan Wakes

"High adventure equaling the best space opera has to offer, cutting-edge technology, and a group of unforgettable characters bring the third installment of Corey's epic space drama (after Caliban's War and Leviathan Wakes) to an action-filled close while leaving room for more stories to unfold. Perhaps one of the best tales the genre has yet to produce, this superb collaboration between fantasy authors Daniel Abraham and Ty Franck should reawaken an interest in old-fashioned storytelling and cinematic pacing. Highly recommended."
—Library Journal (starred review) on Abaddon's Gate

"[T]he authors are superb with the exciting bits: Shipboard coups and battles are a thrill to follow."
—Washington Post on Abaddon's Gate