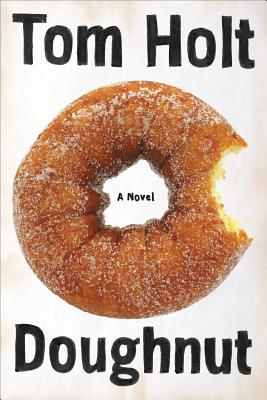 The doughnut is a thing of beauty.

A circle of fried doughy perfection.

A source of comfort in trying times, perhaps.

For Theo Bernstein, however, it is far, far more.

Things have been going pretty badly for Theo Bernstein. An unfortunate accident at work has lost him his job (and his work involved a Very Very Large Hadron Collider, so he's unlikely to get it back). His wife has left him. And he doesn't have any money.

Before Theo has time to fully appreciate the pointlessness of his own miserable existence, news arrives that his good friend Professor Pieter van Goyen, renowned physicist and Nobel laureate, has died.

By leaving the apparently worthless contents of his safety deposit to Theo, however, the professor has set him on a quest of epic proportions. A journey that will rewrite the laws of physics. A battle to save humanity itself.

This is the tale of a man who had nothing and gave it all up to find his destiny -- and a doughnut.

Tom Holt was born in London in 1961. At Oxford he studied bar billiards, ancient Greek agriculture and the care and feeding of small, temperamental Japanese motorcycle engines; interests which led him, perhaps inevitably, to qualify as a solicitor and emigrate to Somerset, where he specialized in death and taxes for seven years before going straight in 1995. He lives in Chard, Somerset, with his wife and daughter.

"Tom Holt's Doughnut presents a roller-coaster ride through the world of physics and the origins of the universe."—Library Journal

"A light read from the prolific humorist; a romp round the multiverse."—SFX on Doughnut

"Like the deep-fried snack after which it's named, this sic-fi novel is sweet and fun."—Sun (UK) on Doughnut

"Holt adds to his repertoire of comedic sf, one of the most difficult genera acts to master. Theo is an engaging hero; his brilliance is counteracted by his laziness and his compassion, which is matched by his sense of survival. Place this title alongside Terry Pratchett and Neil Gaiman's Good Omens, Pratchett's "Discworld" series, and the absurdist works of mainstream authors such as John Barth and Gilbert Sorrentino."—Library Journal (Starred Review) on Doughnut

"One for physicists as well s Krispy Kreme-loving policemen."—T3 on Doughnut