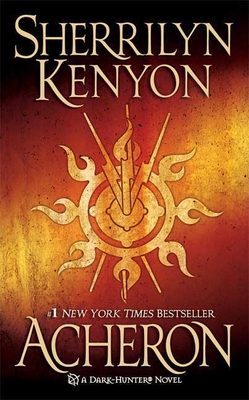 This is book number 11 in the Dark-Hunter Novels series.

Eleven thousand years ago, a god was born. Cursed into the body of a human, Acheron spent a lifetime of shame. But the strongest steel is forged from the fires of hell…

Acheron's human death unleashed an unspeakable horror that almost destroyed the earth. Then, brought back against his will, he became the sole defender of mankind. Only it was never that simple. For centuries, Acheron has fought for our survival and hidden a past he'll do anything to keep concealed. Until a lone woman who refuses to be intimidated by him threatens his very existence. Now his survival—and ours—hinges on hers, and old enemies reawaken and unite to kill them both. War has never been more deadly...or more fun.

New York Times bestselling author Sherrilyn Kenyon is a regular in the #1 spot. This extraordinary bestseller continues to top every genre in which she writes, including manga and graphic novels. More than 70 million copies of her books are in print in more than one hundred countries. Her current series include The Dark-Hunters, The League, Deadman's Cross, Chronicles of Nick, Hellchasers, Mikrochasers, and The Lords of Avalon. Her Chronicles of Nick and Dark-Hunter series are soon to be major motion pictures.

"Kenyon is the reigning queen of the vampire novel."--Barbara Vey, Publishers Weekly

“An engaging read.”—Entertainment Weekly on Devil May Cry

“Kenyon’s writing is brisk, ironic, sexy, and relentlessly imaginative. These are not your mother’s vampire novels.”—The Boston Globe on Dark Side of the Moon