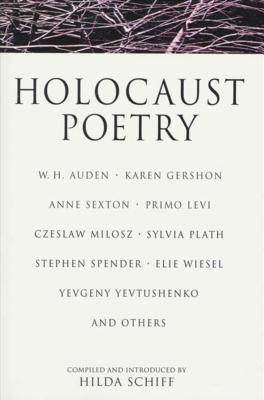 By Hilda Schiff (Editor), Hilda Schiff (Introduction by)
UNAVAILABLE AT THIS TIME (Possible reasons: Backordered, Out-of-Stock Indefinitely, or Print-on-Demand only)
OUT OF PRINT

The only known collection of its kind currently in print, this important volume includes the work of 59 poets--among them Auden, Brecht, Celan, Jarrell, Levi, Milosz, Plath, Sexton, Spender, Wiesel, and Yevtushenko--writing on a range of subjects that are indelibly linked with the Holocaust. Collecting 119 poems in all, Holocaust Poetry commemorates the sanctity of those who died--both Jews and non-Jews--as a result of this unimaginably horrible crime.

Yet Schiff's anthology is also a solemn affirmation of humanity's survival, for it pays homage to the past while also attesting to the often brutal struggles that we as a species still face in this world, day in and day out. Also preserved here are poems written by those who themselves perished in the Shoah, the final testaments and eternal lessons of unknown soldiers, unheralded heroes, unsilenced voices.

Hilda Schiff is a renowned translator, author, anthologist, poet, and scholar. An annual Hilda Schiff Prize in Holocaust Studies is awarded by the Oxford Centre for Hebrew and Jewish Studies at Oxford University.

Hilda Schiff is a renowned translator, author, anthologist, poet, and scholar. An annual Hilda Schiff Prize in Holocaust Studies is awarded by the Oxford Centre for Hebrew and Jewish Studies at Oxford University.

“The power of verse to encompass a topic of mammoth scope and render it into painstakingly personal detail is keenly demonstrated in this absorbing and well thought-out anthology of grief.” —Publishers Weekly

“Can there be poetry about the Holocaust? Isn't this kind of writing an attempt to escape--or to exploit--the suffering of millions? Poet and anthologist Schiff confronts these questions in her eloquent introduction. One answer she finds is that to remain silent is also to lie. Fifty years after the liberation of Auschwitz, great literature about the Holocaust has grown to a flood . . . The pieces here are of astonishing power. In English and in translation from many languages, [nearly 60] poets--including Wiesel, Fink, Brecht, Yevtushenko, Auden, and Sachs--give voice to what seems unspeakable. Schiff points out that compelling historical accounts document the facts and numbers, but a poem, like a story, makes us imagine how it felt for one person. These poems are stark and deceptively simple. No one can read them all at once. Each poem leaves you with an indelible memory. In words of one syllable, the Polish poet Rozewicz writes about having to reinvent language after Auschwitz ("this is a man / this is a tree this is bread" ). There's no healing in this tragedy: the last poem, by Primo Levi, is like a shout of rage to us to remember.” —Hazel Rochman, Booklist