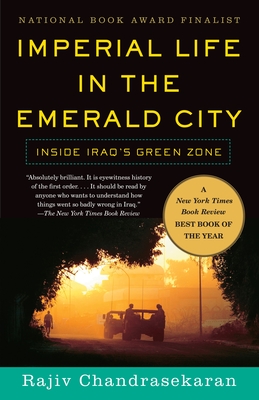 NEW YORK TIMES BESTSELLER • National Book Award Finalist • This "eyewitness history of the first order ... should be read by anyone who wants to understand how things went so badly wrong in Iraq” (The New York Times Book Review).

The Green Zone, Baghdad, Iraq, 2003: in this walled-off compound of swimming pools and luxurious amenities, Paul Bremer and his Coalition Provisional Authority set out to fashion a new, democratic Iraq. Staffed by idealistic aides chosen primarily for their views on issues such as abortion and capital punishment, the CPA spent the crucial first year of occupation pursuing goals that had little to do with the immediate needs of a postwar nation: flat taxes instead of electricity and deregulated health care instead of emergency medical supplies.

In this acclaimed firsthand account, the former Baghdad bureau chief of The Washington Post gives us an intimate portrait of life inside this Oz-like bubble, which continued unaffected by the growing mayhem outside. This is a quietly devastating tale of imperial folly, and the definitive history of those early days when things went irrevocably wrong in Iraq.

Rajiv Chandrasekaran is an assistant managing editor of The Washington Post and currently heads the Post's continuous news department, which provides breaking news stories to the paper's Web site, washingtonpost.com. Prior to that he was bureau chief in Baghdad, before, during, and after the war. Previously he served as Cairo bureau chief and Southeast Asia correspondent, and covered the war in Afghanistan. He joined the Post in 1994. He has served as the journalist in residence at the International Reporting Project at the Johns Hopkins School for Advanced International Studies in Washington, and as a public policy scholar at the Woodrow Wilson International Center, also in Washington.

“Absolutely brilliant. It is eyewitness history of the first order. . . . It should be read by anyone who wants to understand how things went so badly wrong in Iraq.” —The New York Times Book Review

“A visceral – sometimes sickening – picture of how the administration and its handpicked crew bungled the first year in postwar Iraq. . . . Often reads like something out of Catch-22 or from M*A*S*H.” —The New York Times

“Revealing. . . . Chandrasekaran's portrait of blinkered idealism is evenhanded, chronicling the disillusionment of conservatives who were sent to a war zone without the resources to achieve lasting change.” —The New Yorker

“Incredible . . . fantastically written. . . . Chandrasekaran's sharp-eyed account of life inside Baghdad's Green Zone offers some of the blackest comedy at the bookstore.” —Entertainment Weekly