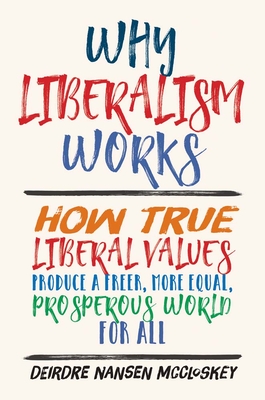 "Beginning with the simple but fertile idea that people should not push other people around, Deirdre McCloskey presents an elegant defense of 'true liberalism' as opposed to its well-meaning rivals on the left and the right. Erudite, but marvelously accessible and written in a style that is at once colloquial and astringent."—Stanley Fish

The greatest challenges facing humankind, according to Deirdre McCloskey, are poverty and tyranny, both of which hold people back. Arguing for a return to true liberal values, this engaging and accessible book develops, defends, and demonstrates how embracing the ideas first espoused by eighteenth-century philosophers like Locke, Smith, Voltaire, and Wollstonecraft is good for everyone.

With her trademark wit and deep understanding, McCloskey shows how the adoption of Enlightenment ideals of liberalism has propelled the freedom and prosperity that define the quality of a full life. In her view, liberalism leads to equality, but equality does not necessarily lead to liberalism. Liberalism is an optimistic philosophy that depends on the power of rhetoric rather than coercion, and on ethics, free speech, and facts in order to thrive.

Deirdre Nansen McCloskey has been distinguished professor of economics and history and professor of English and communications at the University of Illinois at Chicago. She is the author of numerous books, including Bourgeois Equality: How Ideas, Not Capital or Institutions, Enriched the World.

“To get the most out of the book, you do have to come to terms with McCloskey’s idiosyncratic prose style: simultaneously erudite, conversational and forthright”—Robert Colvile, The Times

“Tragically, many of the topics and ideas covered here are ignored by most economists. Happily, Deirdre McCloskey writes about them with great insight, style, and clarity.”—Russ Roberts, author of How Adam Smith Can Change Your Life

“Deirdre McCloskey is a truly humane liberal, and these essays show off her philosophy at its best.”—Tyler Cowen, author of Big Business: A Love Letter to an American Anti-Hero


"Beginning with the simple but fertile idea that people should not push other people around, Deirdre McCloskey presents an elegant defense of 'true liberalism' as opposed to its well-meaning rivals on the left and the right. Erudite, but marvelously accessible and written in a style that is at once colloquial and astringent."—Stanley Fish, author of  The First: How To Think About Hate Speech, Campus Speech, Religious Speech, Fake News, Post-Truth, and Donald Trump

“With her usual panache and conviction, Deirdre McCloskey advocates an unfashionably sensible—and humane—political philosophy, reclaiming for the term ‘liberal’ its original meaning. Whatever you call it, the world needs more of her respect for freedom and individual dignity.”—Diane Coyle, University of Cambridge

“Deirdre McCloskey’s book thoughtfully advances the important conversation of the Great Enrichment with the substance and style for which she is known.”—Vernon L. Smith, Nobel Laureate in Economics