American Enlightenments: Pursuing Happiness in the Age of Reason (The Lewis Walpole Series in Eighteenth-Century Culture and History) (Hardcover) 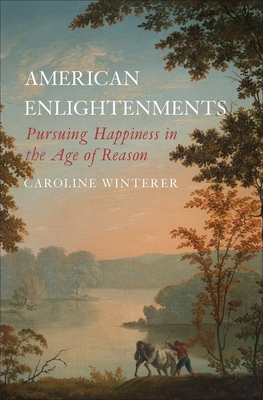 By Caroline Winterer
$35.00
UNAVAILABLE: Backordered or Out-of-Print (But email us to search for a used copy.)

The accepted myth of the “American Enlightenment” suggests that the rejection of monarchy and establishment of a new republic in the United States in the eighteenth century was the realization of utopian philosophies born in the intellectual salons of Europe and radiating outward to the New World. In this revelatory work, Stanford historian Caroline Winterer argues that a national mythology of a unitary, patriotic era of enlightenment in America was created during the Cold War to act as a shield against the threat of totalitarianism, and that Americans followed many paths toward political, religious, scientific, and artistic enlightenment in the 1700s that were influenced by European models in more complex ways than commonly thought. Winterer’s book strips away our modern inventions of the American national past, exploring which of our ideas and ideals are truly rooted in the eighteenth century and which are inventions and mystifications of more recent times.

Caroline Winterer is Anthony P. Meier Family Professor in the Humanities at Stanford University and director of the Stanford Humanities Center. The author of three previous books, she received an American Ingenuity Award from the Smithsonian Institution.

"Fascinating . . . engagingly unfamiliar and surprising. American Enlightenments offers a valuable and provocative contribution to the ongoing question of how to understand the eighteenth-century enlightenment and its meaning for our contemporary moment."—Journal of the Early Republic

"[Winterer] reminds readers that the Enlightenment in the US was not synonymous with the American Revolution and that Americans not only absorbed Enlightenment thought but also contributed to it in important ways."—Choice

"A work of outstanding scholarship, American Enlightenments views the Enlightenment as pluralistic, with diverse manifestations, each with its own context, motivations, and achievements. Caroline Winterer’s approach is novel, accessible, refreshing, and up-to-date. Her book is a major accomplishment."—Daniel Walker Howe, Pulitzer Prize–winning author of What Hath God Wrought: The Transformation of America, 1815–1848

"In a lively prose style that is as convincing as it is entertaining, Caroline Winterer comprehensively covers the American Enlightenment generously defined as the whole North American continent."—Joyce Appleby, professor emerita of history, University of California, Los Angeles, and author of Shores of Knowledge: New World Discoveries and the Scientific Imagination

"American Enlightenments advances our conception of Enlightenment—both in America and Europe—in powerful ways. With chapters devoted to everything from seashells and geology to the ancient peoples of Mesoamerica, Winterer convincingly argues that our perception of a unified 'American Enlightenment' is a myth, while at the same time showing Enlightenment in general to be a conversation that required and included America."—Mark A. Peterson, University of California, Berkeley

"Caroline Winterer’s luminous study of the correspondence chains that bound figures like Franklin and Jefferson to their counterparts in Europe shows us an Enlightenment far richer than any we have seen before. She shows us not an abstract age of Reason but men and women reasoning intensely and creatively with the knottiest problems of science, politics, religion, and philosophy of their times."—Daniel T. Rodgers, Princeton University