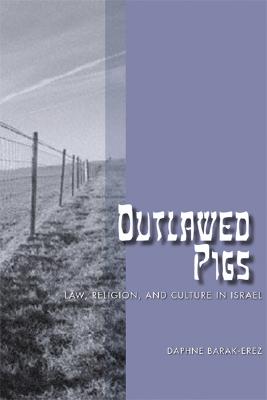 The prohibition against pigs is one of the most powerful symbols of Jewish culture and collective memory. Outlawed Pigs explores how the historical sensitivity of Jews to the pig prohibition was incorporated into Israeli law and culture.
Daphne Barak-Erez specifically traces the course of two laws, one that authorized municipalities to ban the possession and trading in pork within their jurisdiction and another law that forbids pig breeding throughout Israel, except for areas populated mainly by Christians. Her analysis offers a comprehensive, decade-by-decade discussion of the overall relationship between law and culture since the inception of the Israeli nation-state.
By examining ever-fluctuating Israeli popular opinion on Israel's two laws outlawing the trade and possession of pigs, Barak-Erez finds an interesting and accessible way to explore the complex interplay of law, religion, and culture in modern Israel, and more specifically a microcosm for the larger question of which lies more at the foundation of Israeli state law: religion or cultural tradition.

Daphne Barak-Erez is professor of law at Tel Aviv University in Tel Aviv, Israel. She is the author of numerous books and articles, including a coedited book in English titled Human Rights in Private Law.

"A meticulously researched narrative of the surprising consequences of efforts to abolish the business of selling pork over the course of the modern history of the state of Israel. . . . Anyone interested in the history of regulations, particularly anyone interested in the history of regulations in societies marked by religious pluralism and controversy, will learn much from this model case study.” —Hendrik Hartog, Princeton University

“It is hard to underestimate the significance of the pig for Jews, and Daphne Barak-Erez’s book shows it to be a delightfully apt way to get at the fascinating maze that is Israeli politics.”—William Ian Miller, University of Michigan Law School