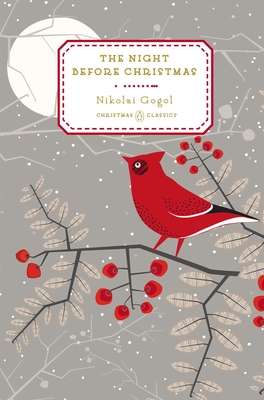 One of six beloved Christmas classics in collectible hardcover editions

Written in 1831 by the father of Russian literature, this uproarious tale tells of the blacksmith Vakula’s battle with the devil, who has stolen the moon and hidden it in his pocket, allowing him to wreak havoc on the village of Dikanka. Both the devil and Vakula are in love with Oksana, the most beautiful girl in Dikanka. Vakula is determined to win her over; the devil, equally determined, unleashes a snowstorm to thwart Vakula’s efforts. Zany and mischievous, and drawing inspiration from the folk tales of Gogol’s far-flung village in Ukraine, The Night Before Christmas is the basis for many movie and opera adaptations, and is still read aloud to children on Christmas Eve in Ukraine and Russia.

Give the gift of literature this Christmas.

Penguin Christmas Classics honor the power of literature to keep on giving through the ages. The six volumes in the series are not only our most beloved Christmas tales, they also have given us much of what we love about the holiday itself. A Christmas Carol revived in Victorian England such Christmas hallmarks as the Christmas tree, holiday cards, and caroling. The Yuletide yarns of Anthony Trollope popularized throughout the British Empire and around the world the trappings of Christmas in London. The Life and Adventures of Santa Claus created the origin story for the presiding spirit of Christmas as we know it. The holiday tales of Louisa May Alcott shaped the ideal of an American Christmas. The Night Before Christmas brought forth some of our earliest Christmas traditions as passed down through folk tales. And The Nutcracker inspired the most famous ballet in history, one seen by millions in the twilight of every year.

Beautifully designed hardcovers—with foil-stamped jackets, decorative endpapers, and nameplates for personalization—in a small trim size that makes them perfect stocking stuffers, Penguin Christmas Classics embody the spirit of giving that is at the heart of our most time-honored stories about the holiday.

Nikolai Gogol (1809–1852) was the son of a Ukrainian gentleman farmer who was the author of several folk comedies. He attended a variety of boarding schools, where he proved an indifferent student but was admired for his theatrical abilities. In 1828 he moved to St. Petersburg and began to publish stories, and by the mid-1830s he had established himself in the literary world and been warmly praised by Pushkin. In 1836, his play The Inspector-General was attacked as immoral, and he left Russia, remaining abroad for most of the next dozen years. During that time he wrote two of his best-known stories, “The Nose” and “The Overcoat,” and in 1842 he published the first section of his masterpiece Dead Souls. Gogol became increasingly religious as the years passed, and in 1847 he became the disciple of an Orthodox priest who influenced him to burn the second part of Dead Souls and then abandon writing altogether. After undertaking an extreme fast, he died at the age of forty-two.

Konstantin Makovsky (illustrator; 1839–1915) was one of the most celebrated artists in the Russian Empire in the nineteenth century.

Igor Grabar (illustrator; 1871–1960) was a student of Konstantin Makovsky’s, and a celebrated painter in his own right.  He later became one of the premier art administrators in the Soviet Union, personally advising Joseph Stalin.

Aleksei Kivshenko (illustrator; 1851–1895) was a Russian painter acclaimed for his depictions of historical subjects, especially battles.

“For lit nerds and loved ones who are notoriously hard to shop for, you can’t go wrong with these festively bound classics. . . . Their size makes them perfectly stocking-stuffable.” —Entertainment Weekly, “The Must List”

“Leave it to the folks at Penguin—who gave us Gothed-out editions of horror classics for Halloween—to package these . . . slim Yuletide-themed volumes.” —Newsday, “Best Books to Give as Holiday Gifts”

“Remember how Christmas was celebrated before Black Friday with these 19th-century authors, in small uniform volumes wrapped in pretty jackets.” —USA Today, “Holiday Gift Books So Pretty, No Need to Wrap”